The Diademed Sifaka (Propithecus diadema) is often considered the most beautiful of all of Madagascar's 100 or more species and subspecies of lemur. It can reach more than 1 metre in body length and its long silky coat ranges from a golden orange to silver grey, with a black face surrounded in fluffy white fur. Its name Diademed comes from its black crown. 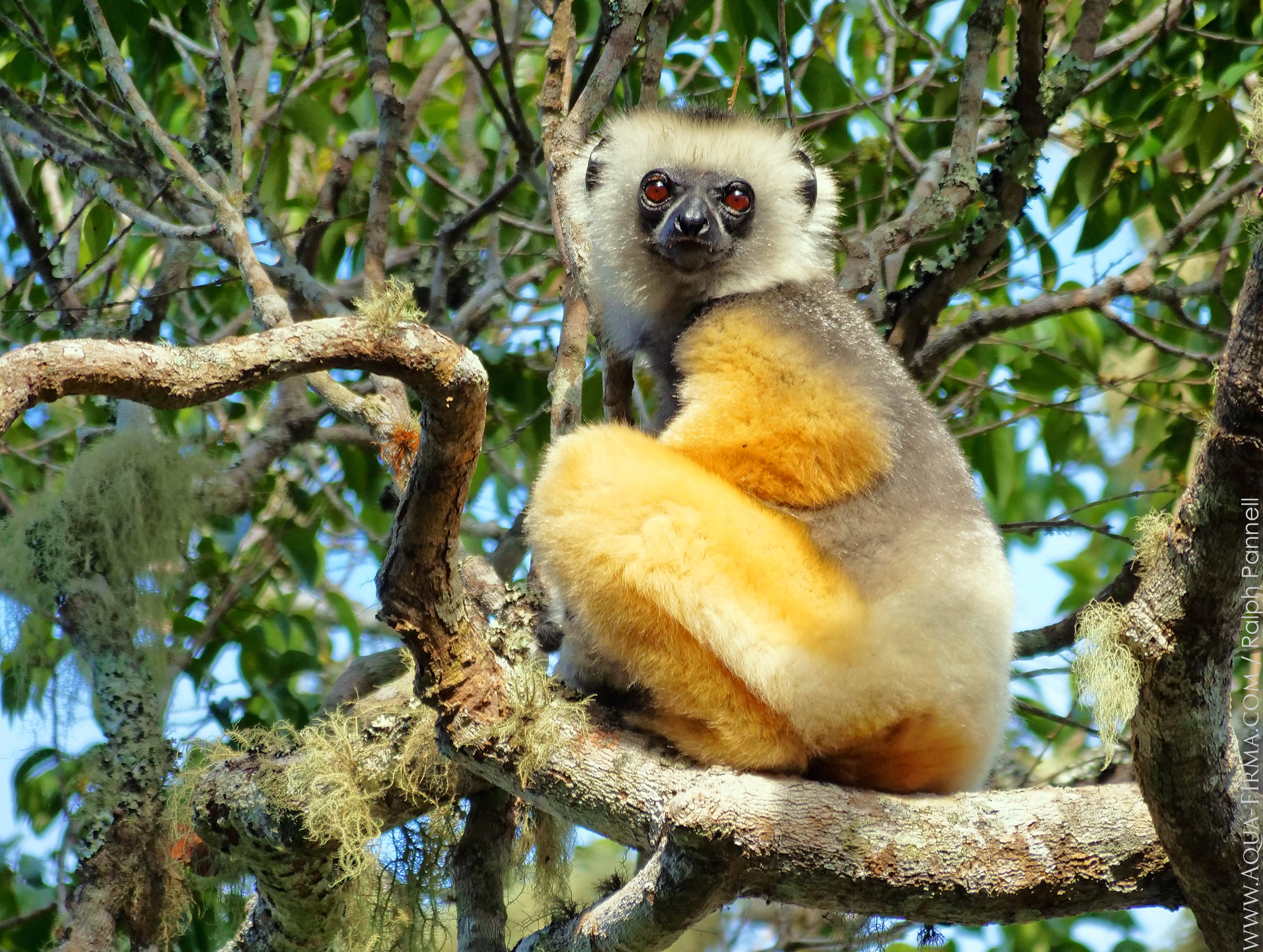 It is the largest of 9 species of Sifaka, which are spread throughout most of the country, each occupying different geographical ranges. The Diademed Sifaka finds its home in the tropical rainforests of central north eastern Madagascar, ranging from 200 metres altitude up to 1,550 metres. These are some of Madagascar's most consistently wet forests, with clouds brought in by consistent trade winds from the Indian Ocean.

The species is Critically Endangered with an estimated 6,000 to 10,000 surviving in the wild. Deforestation through slash and burn agriculture and forest cutting for fuel are its biggest threats. It is also sometimes ensnared for bushmeat.

Like all Sifakas, the Diademed Sifaka is a herbivore, feeding on a combination of leaves, fruits, seeds and flowers. They live in groups usually of between 2 and 10 individuals, with adult females giving birth to a single offspring in July. The young are weaned after about 6 months and reach maturity at 2 years. Life expectancy is up to 20 years.

Diademed Sifakas are territorial, scent marking an exclusive home territory of 25 to 50 hectares (62 to 125 acres).  Whilst they will defend this territory against others of the same species, they are happy to share their range with other lemurs such as the Common Brown Lemur. Sifakas travel around a mile each day to mark their territory and feed on a diverse range of food each day - sometimes more than 25 vegetative species each day.

In 2014, Aqua-Firma helped the Rainforest Trust and local charity Voakajy, to establish a new 76,000 acre forest reserve called Mangabe, where Diademed Sifakas share some stunning forest covered hills and valleys with Madagascar's largest surviving lemur, the Indri.  It also shares the area with the Golden Mantella frog, which was once thought to be extinct, but was rediscovered here in large numbers.

Aqua-Firma has funded reforestation projects at Mangabe, so that habitat for all species living there can be expanded. To see this area for yourself, you can join our October Lemurs, Golden Frogs & New Rainforest Reserve holiday, during which we usually have very good chances of seeing Diademed Sifakas up close in the wild. We can also take you to see these lemurs on our privately guided overland safaris which we operate throughout the year.