The Frog & Forest - not the name of an olde English public house, but a story which combines tribute to World Forests Day and World Frog Day which came to pass this week.

In 2005, the last of Madagascar's Golden Mantella Frogs (Mantella aurantiaca) disappeared from areas it was known to exist, considered extinct. Most commonly found close to the banks of rivers and ponds, populations of this frog are quickly decimated if people bring cattle into their habitat, or if forest burning takes place. The pet trade is also a major problem, since the rarer an attractive animal like this becomes, the higher the price it fetches. 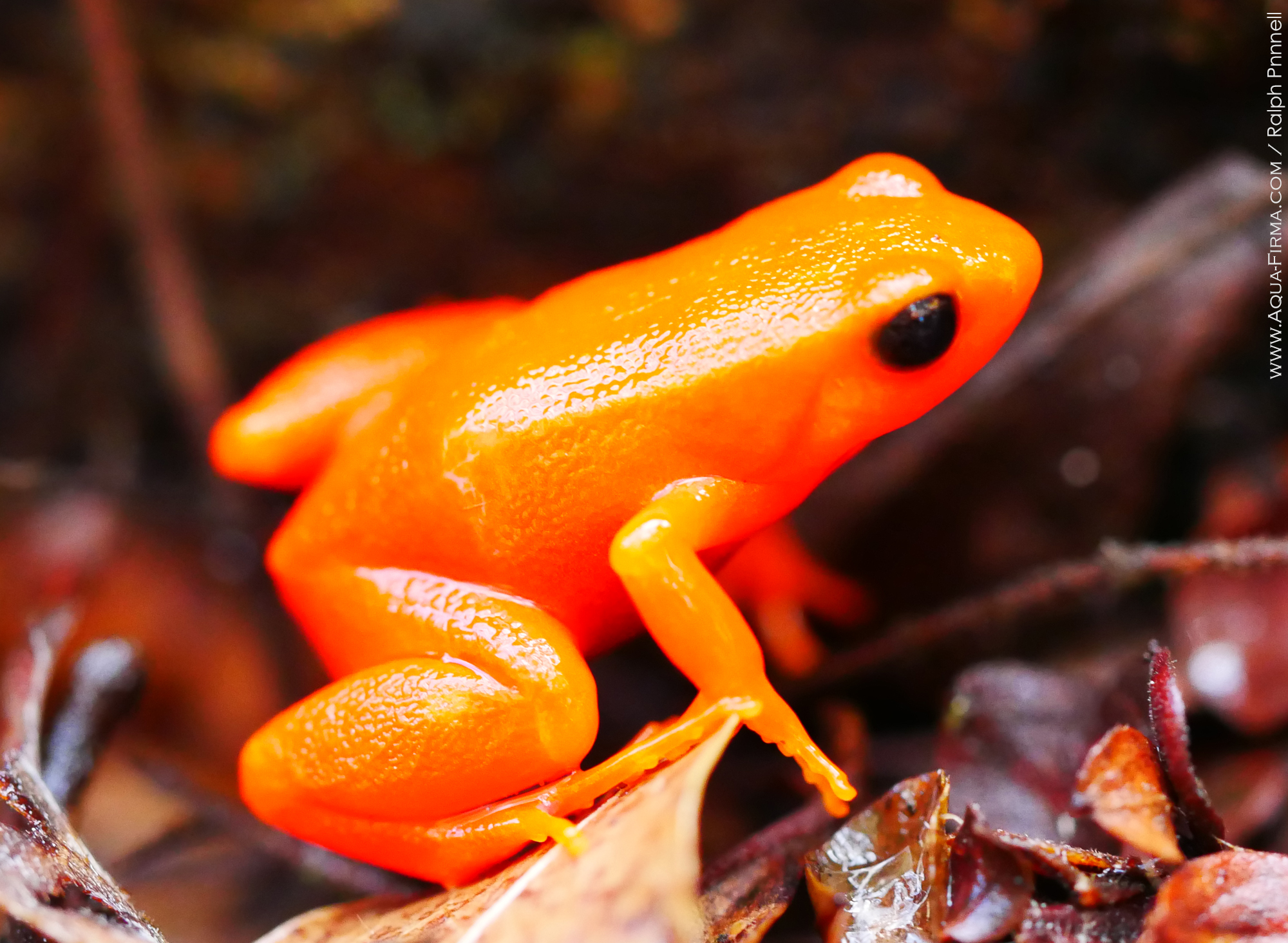 In 2008, Aqua-Firma's Madagascar conservation charity partner, Voakajy, discovered areas of rainforest where the Golden Mantella frog still survived. Subsequent surveys found more than 100 ponds and boggy areas where significant populations were thriving. Where one species does well because its habitat is intact, inevitably other species can too; and these same forests were found to contain significant populations of endangered lemurs. This included possibly the biggest population of Madagascar's largest lemur, the Indri, surviving outside of existing protected areas.

Without any delay, Voakajy started raising the money needed to protect the forests here, known collectively as Mangabe after one of the villages just outside the forest margins. Our partners at the Washington-based Rainforest Trust also got involved; Aqua-Firma needed little convincing that this was a conservation priority for which funds from our Rainforest4Climate programme needed to be channelled. We eventually funded 1,000 acres out of a total 74,816 acres of new reserve which was successfully gazetted in 2015.

Since the rainforest reserve's creation, amphibian, reptile, avian and mammal researchers have been conducting detailed surveys. Lemurs are doing particularly well, with Mangabe's beautiful hills and winding river valleys filled with the chorus of up to seven family groups of Indri within audible range. Other lemurs found here include the beautifully coloured Diademed Sifaka (Propithecus diadema), the pocket-sized Goodman's Mouse Lemur (Microcebus lehilahytsara), the mainly nocturnal Eastern Woolly Lemur (Avahi laniger), the Hairy-eared Dwarf Lemur (Allocebus trichotis) and the Lesser Bamboo lemur (Hapalemur griseu). The infamous Aye-Aye lemur (Daubentonia madagascariensis), with its extended claws and devilish look, also probably exists in these forests, but local rangers avoid finding them because to see one is meant to bring very bad luck.

Whilst gazetting the area was a major step forward, it is only step one. Voakajy works tirelessly to help communities living around the forest to develop more sustainable farming techniques ,so that damage by slash and burn can be avoided. Aqua-Firma is also helping efforts to develop sustainable ecotourism in the area, which is where you can get involved by joining our pioneering Lemurs, Golden Frogs & New Rainforest Reserve trip to the area in October.  This will be our third such trip, whereby we bring a mobile tented safari camp into the Mangabe Reserve, to compliment an emerging fixed camp which we hope will one day be a community owned lodge. We should be able to find Golden Mantella frogs for you - hopefully in numbers of up to 2,000 in a small area, aggregated to feed and breed. It is a strange and privileged feeling to be amongst of something which exists in such as tiny part of our planet.

In addition to the Golden Mantella reserve, we also travel to explore forests in the Andasibe area and the Mantadia National Park. Guides will include local researchers, rangers and the very people who created the Mangabe Reserve. Tour leader will once again be Aqua-Firma Director, Ralph Pannell, formerly of Rainforest Concern.

Our 2018 Lemurs, Golden Frogs & New Rainforest Reserve holiday to Madagascar funded the creation of a tree nursery and planting of 2,000 trees. 1,000 of these trees are to re-establish habitat corridors between separated areas. A further 1,000 are fruit trees to support local communities in their efforts to develop more sustainable agriculture.