Katavi National Park, covering an area of 4,471 km², is Tanzania's third largest National Park and part of the much larger Katavi Rukwa eco-system, one Tanzania's most productive and important wildlife areas. Amongst its diverse wildlife it contains Tanzania's densest concentration of Hippos and Nile Crocodiles.

Katavi is very little visited for such a huge and wildlife rich environment, with only one to two thousand visitors arriving each year, dispersed across a wide area. From an authentic remote tented camp, we can explore this thrilling reserve on foot (with an armed ranger) or by 4 X 4 with little chance of encountering other people, but with superb chances of encountering elephants, zebra and buffalo or lions. We can even take you fly camping, pitching your Out of Africa mini-camp just about as remote as you can be on safari in Tanzania.

Large sections of Katavi are dominated by dry Brachystegia woodland. This forms a dense dry forest which is comparatively little studied and itself supports much wildlife including Eland, Sable and Roan Antelopes. Our focus in the National Park is the Northern Section between the seasonally shallow lakes of Chada and Katavi and the Katuma River. Here the landscape opens up into the huge floodplains of Katisunga.

In the Dry Season (May - mid November) wildlife concentrates at Katisunga in huge numbers with perhaps up to 4,000 elephants, 15,000 buffalo, 3,000 reedbuck and 2,000 hartebeest. It is then that the park's predators, including Lions, Leopards and Spotted Hyenas gather and the savage battle for survival reaches its most dramatic. Dangerous battles break out for breeding rights and territory in rapidly shrinking Hippo Pools, as rival males are forced into ever closer proximity. 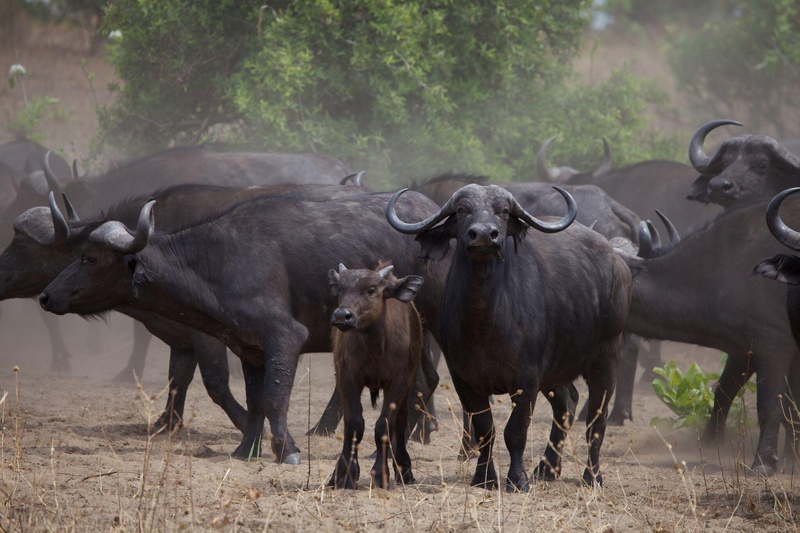 Sitting close to Lake Tanganyika, Katavi is divided from Africa's longest lake by a range of steep, forested mountains which are home to Chimpanzees and many species of animals more typical of West Africa and Congo Basin. Katavi's proximity to the Mahale Mountains National Park provides the possibility of combining a classic walking safari in Katavi with Chimpanzee Tracking in Mahale - something that Aqua-Firma can tailor to your needs. For further information about visits to Katavi or safaris throughout Tanzania, please contact one of our Tanzania Experts.