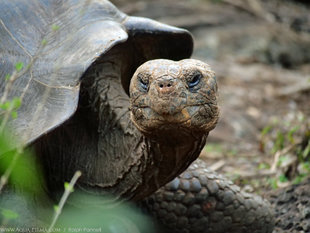 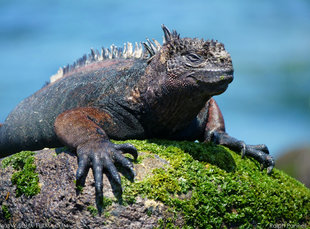 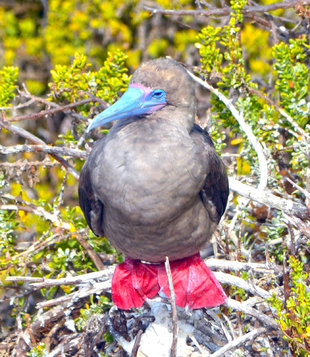 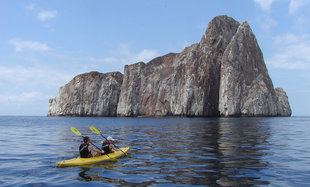 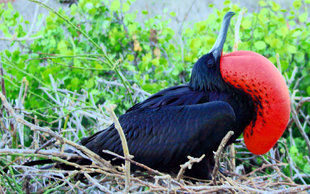 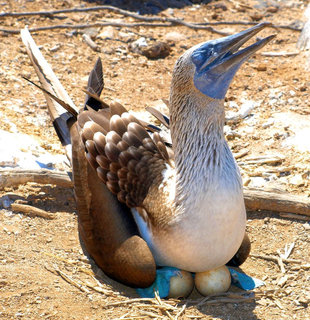 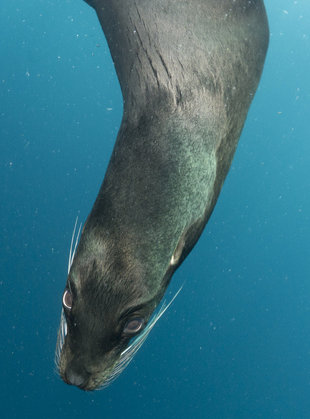 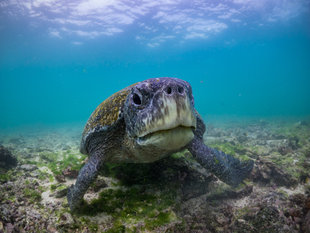 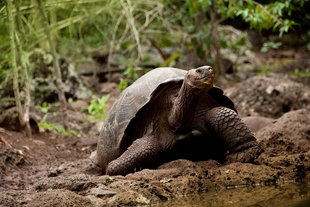 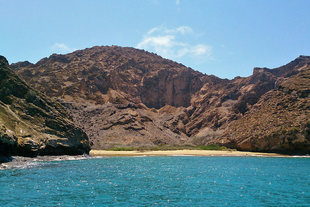 San Cristobal is the fifth largest, easternmost Galapagos island of the archipelago and is geologically one of the oldest. It has the second largest human settlement and plays the fundamental role of being home to Puerto Baquerizo, the administrative capital of the Galapagos Islands.

San Cristobal is home to one of the Galapagos two main airports. This is little more than 5 minutes drive from the town and quayside from where small launches can take you out to join your Galapagos yacht or dive liveaboard.

One of the overwhelming features you will soon discover is that although San Cristobal has a human population, the main town (Puerto Baquerizo) is very much shared with its sealions. You will find them on all of the beaches along the town waterfront, on the beachside walkways and very often on the park benches. Check before you sit down! Whilst rowdy drinkers are not something you are likely hear if you stay in a hotel overnight in town, noisy sealions you will.

The assets Aqua-Firma makes greatest use of on San Cristobal are its offshore islets and its coastline. For information about Kicker Rock (Leon Dormido) and Los Lobos, please click on the Marine Life tab.

The coast of San Cristobal provides some excellent physical and wildlife features for our sea kayaking programmes. Coastal and in land trekking provide some excellent opportunities for birdwatching, visiting sealion colonies and at La Galapaguera de Cerro Colorado, you can explore the native vegetation in search of San Cristobal Giant Tortoises.

Puerto Baquerizo is home to the Galápagos National Park Interpretation Centre.  This centre was created for the benefit of both travellers and of the local community, providing a fundamental source for information on the island's natural history, human interaction, ecosystems and wildlife. One of its most interesting exhibits is a topographical model of the islands covering both land and the sea bed.

The visitor centre, various sealion and surfing beaches, coastal hikes and protected areas on the islands can be visited relatively easy without the need to a guide. If this is of interest during a stay, Contact Us for a guide to our accommodation and some of the locations you can visit in this way.

Located just 6 miles from Puerto Baquerizo is Playa Ochoa, a small accessible beach where one can expect to see the Chatham mockingbird and various species of Darwin's finches. White cheek pintails can often be spotted wading through the hyper-saline pond at the rear of the beach, while the inviting waters present opportunities for some introductory snorkelling.

The Galapagos National Park Reserve of La Galapaguera provides visitors with the opportunity of seeing a species of giant tortoise called the Saddle Back.

Punta Pitt is an excellent dive site, as well as the only location within the whole of the Galapagos where all three species of booby can be seen at the same time (the Red footed, Blue footed and Nazca Booby).

A worthwhile excursion within walking reach of Puerto Baquerizo Moreno is a coastal path which takes you past and beyond the Galapagos Interpretation Centre. The trail will lead to Frigate Hill, named as a consequence of the large numbers of frigate birds that can be encountered here. The top of the hill offers spectacular views on both sides: one side being a beautiful white sandy beach and the other, rooftops of Puerto Baquerizo.

One of the most renowned snorkelling and dive sites off San Cristobal is Kicker Rock, also known as Leon Dormido ('sleeping lion'). This small rock rises steeply with a considerable split through the middle where sharks, turtles and rays can often be seen. Visibility is variable, but at its best, our team has had the great fortune of snorkelling with an estimated 200 Galapagos sharks, a small schools and individual hammerheads, eagle rays, Pacific Green Turtles and more. Large schools of jacks, barracuda and rainbow runners can also often be seen. The view of the steep sea cliffs above you is impressive and the orange shades which cover the rock make for a lovely backdrop as your boat moves slowly past.

Shark encounters in this part of the Galapagos tend to be best when the waters are warmer and clearer. This tends start towards the end of November and end by late May or into mid June.

The island of Los Lobos is another marine life highlight and provides one of the best opportunities in the Galapagos for snorkelling with sealions. Families of them can be found basking along the shore. It is usually the smaller sealions that hop in for a play, swimming right up to your mask, darting in circles and often tugging on your snorkelling fins. When a larger sealion hops in too, you suddenly wake up to just how large they can be. Fortunately it is quite unlikely that an alpha male will waste its time playing with you.

A sheltered shallow sandy area between Los Lobos and San Cristobal provides an ideal check out dive location, with the added possibility of seeing sealions underwater. This is often your first dive on one of our Dive Liveaboard trips. Another location is in shallow water close to a floating platform in the main bay, placed there to encourage sealions to bask there rather than on local fishing boats!

It makes for a very impressive dive site, involving diving in the narrow channel with the vertical cliffs on both sides. Divers can expect to encounter huge schools of jacks, barracuda, rainbow runners and if you are lucky, a Galapagos shark or hammerhead shark. The largest fish, sharks and rays tend to be found to the west of Kicker Rock.

Diving at Punta Pitt in the far north east of the island provides opportunities to see large schools of fish like grunts, snappers and jacks. During the warm season there is sometimes the occasional glimpse of the elusive whale shark. For reliable whale sharks encounters, however, you really need to dive at Wolf Rock and Darwin during the colder June - October season.

The San Cristobal Island Conservation Project was established to tackle some of the island's biggest conservation challenges. The most significant problem has been invasive species.  From a botanical perspective, a sizeable nursery has been built to propagate native species for reintroduction.  The project is also encouraging local farmers to adopt organic agriculture and provide opportunities for local species to grow.

San Cristobal has endured a substantial amount of deforestation over the years in order to generate space for agricultural use; subsequently one of the project's aims includes reforestation attempts. Much of the work, research and monitoring involved, is carried out by volunteers, the ongoing help and support of which is invaluable to the overall project and the future of the island's wildlife.

San Cristobal comprises two coalesced volcanoes.  The south western half of the island is a symmetric shield volcano, whose last eruption was some 650,000 years ago. The north eastern half is a more recently active volcano, with the most recent flows occurring within the last few centuries.

The island is characterised by its eroded volcanic peaks in the north of the island and the abundance of rich vegetation that exists in the south.

Situated in the highest part of the island is El Junco lagoon, the only permanent fresh water body in the Galapagos archipelago, with its well preserved sediment providing a useful source for historical research. The lagoon was created from the gradual collection of rainwater and condensation over a number of years and is a haven for congregations of frigate birds.

An interesting geological formation is that of Leon Dormindo - a remarkable formation situated 4 miles off the central western coast of the island and rising 500 feet out of the Pacific.  When viewed from the south, the formation is reminiscent to that of a big cat; hence its name in Spanish meaning literally 'sleeping lion'. 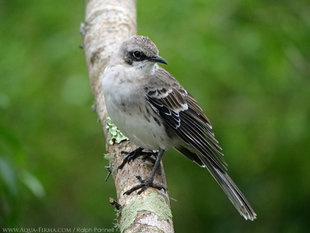 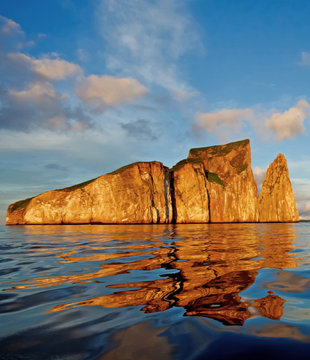 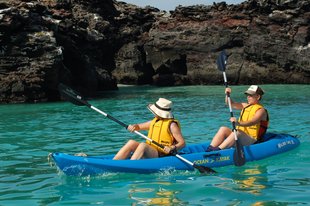 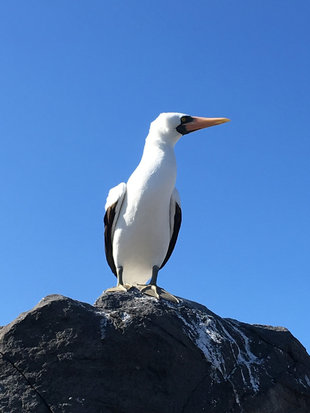 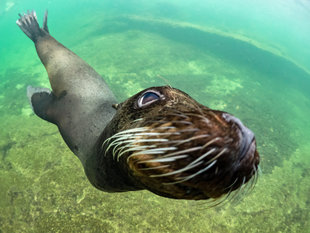 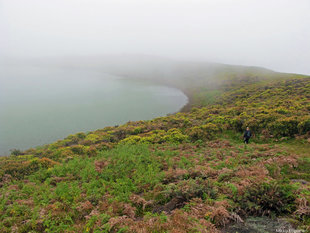