Marine Iguanas of the Galapagos

Marine Iguanas (Amblyrhynchus cristatus) are abundant along the coastlines of much of the Galapagos Islands, most often seen basking in sunshine, snorting every once in a while to excrete salt out of glands beside their nose.  There are 7* recognised subspecies and an estimated total population of 250,000.  Interestingly, hybrids with land iguanas have been recorded on South Plaza Island.

*the Pinzon marine iguana (A. c. ater) is not clearly identified as an 8th subspecies

Marine iguanas are generally dark in colour, with roughened skin which increases their surface area to help absorb heat from sunlight. From nose to the tip of their tail, they can reach up to 84 cm (33 inches).  Sub-species on Isabela, Santa Cruz and Fernandina are the largest, while those found on Genovesa and Española are the smallest. Females are between 20 - 40% smaller than adult males of the same subspecies, with a more blackened shade. 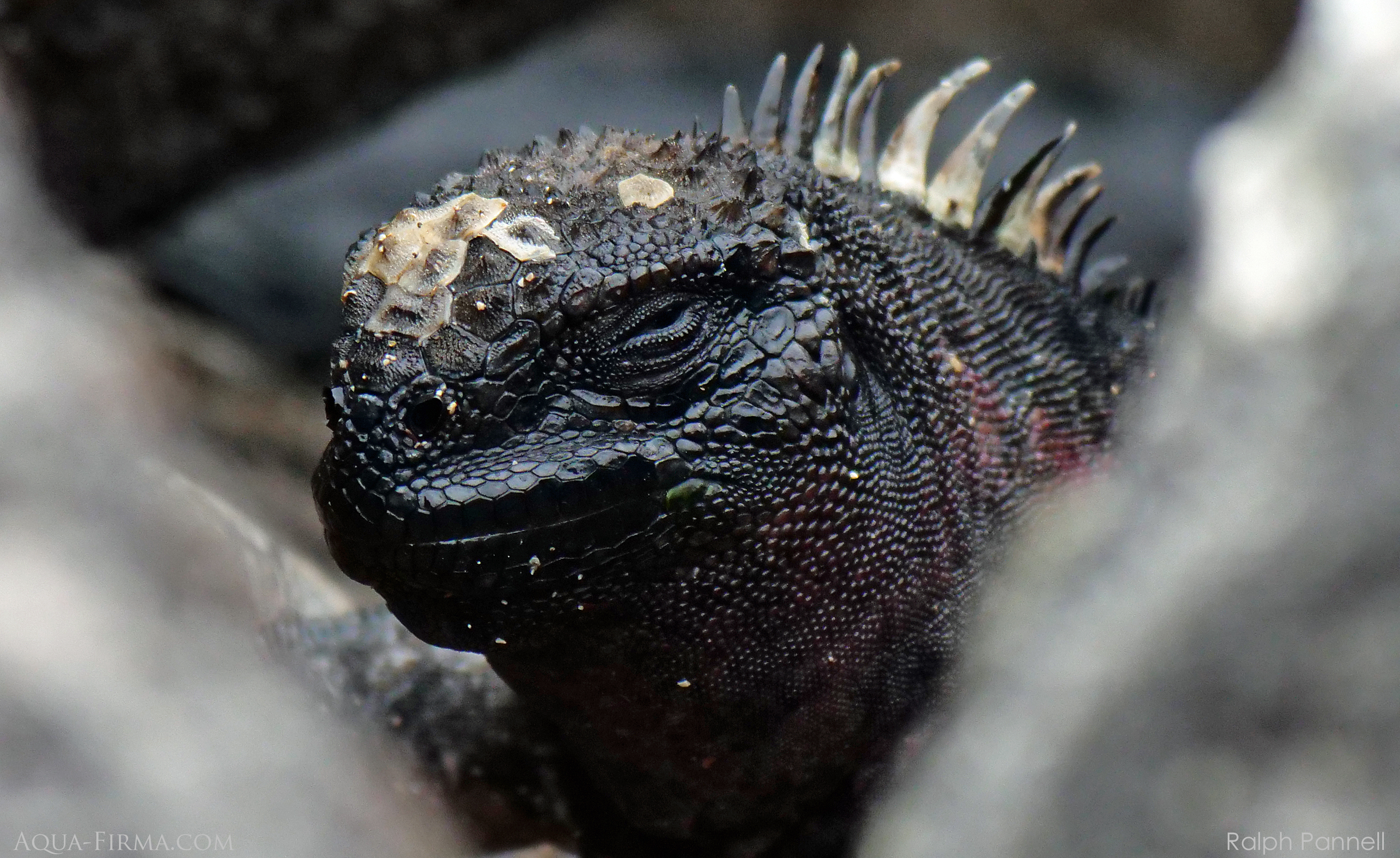 Marine Iguanas can be distinguished from the Land Iguana by their flattened and fairly squared nose, which has adapted to this shape for the sole purpose of feeding on marine algae.  They can also be differentiated from the land iguana by their vertically flattened tail; an adaptation to help them with swim, which they perform with side to side strokes, just like a fish or a shark. This movement is in contrast to whales and dolphins, which evolved from lives on land to swim using up and down strokes, bending at what in previous evolutionary forms would have been hips and knees. 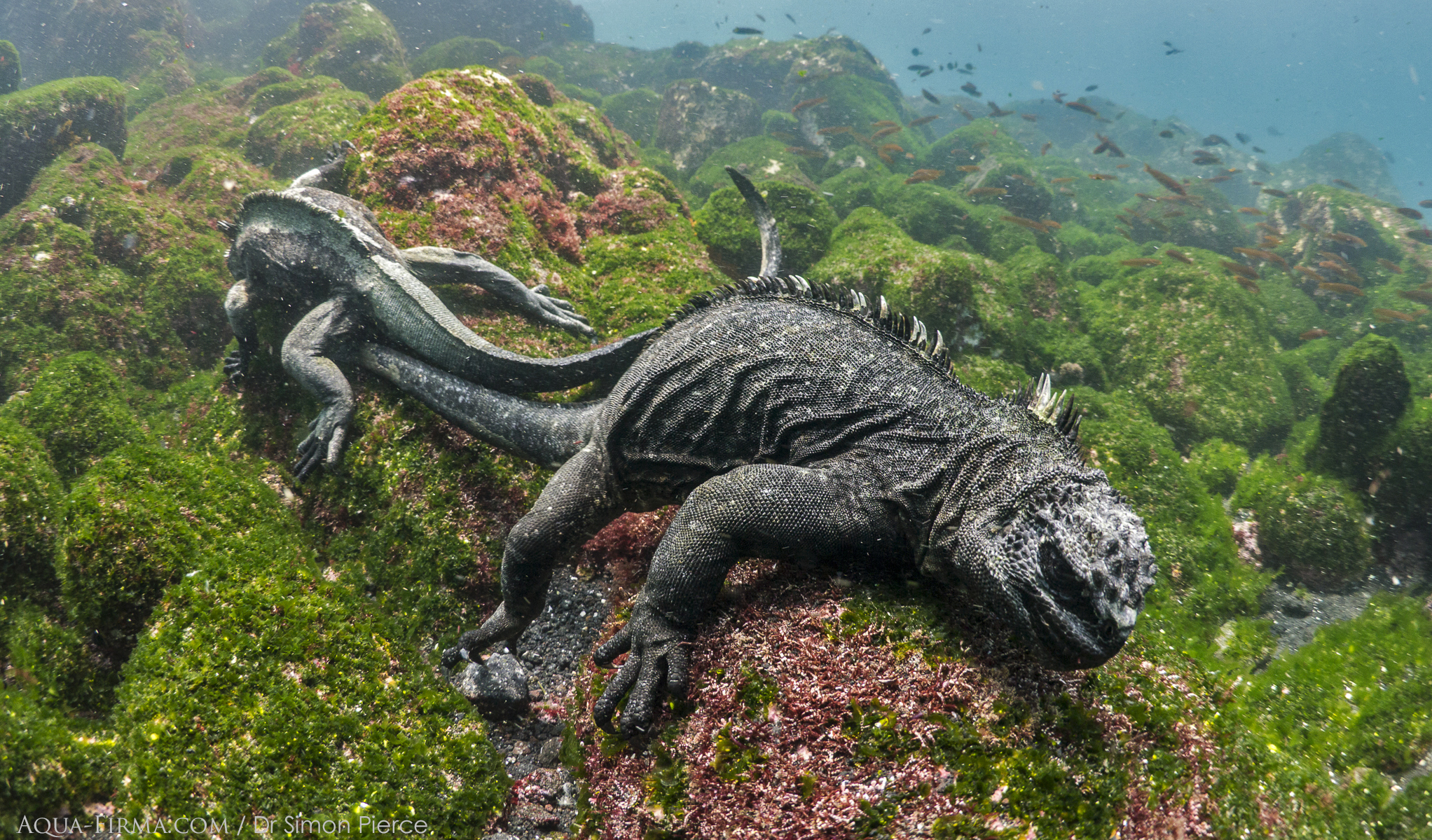 Adult male marine iguanas have a row of long spines which stretch from head to tail. In females, the spines are shorter. The colouring and patterns vary dependent on the subspecies, ranging from red and black (venustissimus on Española), green, yellow and black (albermarlensis on Isabela) to a predominantly dark and soot-like colour (cristatus on Fernandina).  During the mating season, adult male marine iguana colouring becomes more variegated and brighter.

Marine iguanas can most commonly be seen along rocky shorelines, with females and juveniles often observed basking in the sun together in large groups. They have to do this to bring their body temperatures up, before entering relatively cool Galapagos waters to feed. They can often also be seen climbing trees or cacti to their favoured sunbathing spot.

Galapagos marine iguanas are the only marine lizard in the world to feed on algae obtained from either the splash zone or through diving.  They usually dive for about 10 minutes, but can stay submerged for as long as half and hour.  Males are highly territorial , particularly during the breeding season, when they shake their heads up and down and exhale loudly to assert themselves.  Males will take up to 8 years to become sexually mature.

Marine iguanas can actually shrink by up to 20%, which they do this when food becomes scarce. It's not just their body weight that reduces - their skeleton shrinks as well, making them physically shorter.

A positive adaptation is that marine iguanas tend to increase breeding just after El Nino events.

We enjoy encounters with marine iguanas throughout the Galapagos, often sitting close to large groups of them. One area where we can usually enjoy opportunities to swim with them comes on our trips to islets off the south coast of Isabela Island. They also come within range of us as we snorkel in the area, which provides great demonstrations of how they use their tails to swim, whilst their clawed feet hang beneath them. Some of our best encounters with Green Turtles is in these waters.

Punta Espinoza at Fernandina Island is another great place to snorkel with them - in this case as they feed on algae. This area is again, good for Green Turtles, as well as Galapagos Penguins and Flightless Cormorants.

To scuba dive with marine iguanas, Fernandina Island is also usually the best, as a dive site called Cape Douglas (Cabo Douglas). We will be heading here for our Shark Research Insights & Photography Dive Liveaboards in June 2022 and August 2023, hosted by marine biologist Dr Chris Rohner.