Fossas have semi-retractable claws, flexible ankles that allow them to climb up and down trees head first and a tail almost as long as their body. Adults can have a body-length of up to 80cm (31") and weigh up to 8.6kg (19lb). Fady (taboos) offers some protection for Fossa; they have traditionally been feared as a dangerous animal though some villages do take them for bushmeat. It is not known exactly when the now extinct Giant Fossa disappeared; described in 1658 as a 'large, rare, leopard-like carnivore', they were identified by subfossil remains and estimated to be around 1.3 times as large as todays Fossa and weighed up to 20kg (44lb). Fossa are currently classified as vulnerable.

Fossas are regularly seen at Kirindy Forest, but it is rare to see them eslewhere, although one of our guides will be identify their presence by their calls. The fossa in this video was a female who we discovered within the primary rainforests of the Mantadia National Park, when she was calling for a mate. 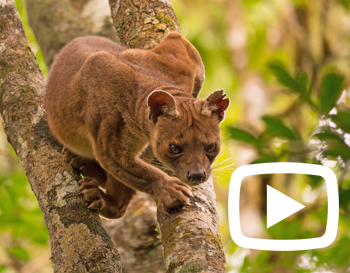