In August and September 2018, regular AQUA-FIRMA Whale Shark and Manta Ray Research & Photography hosts, Dr Simon Pierce and Dr Chris Rohner, joined a diving expedition to the Galapagos which successfully completed underwater ultrasounds on free-swimming whale sharks. They also took blood samples from adult whale sharks for the first time ever in the wild. The incredible results allowed them to see and identify reproductive organs, such as the ovaries, and even developing follicles. These technologies hold promise for finally unlocking the mystery of breeding in the world's largest sharks. 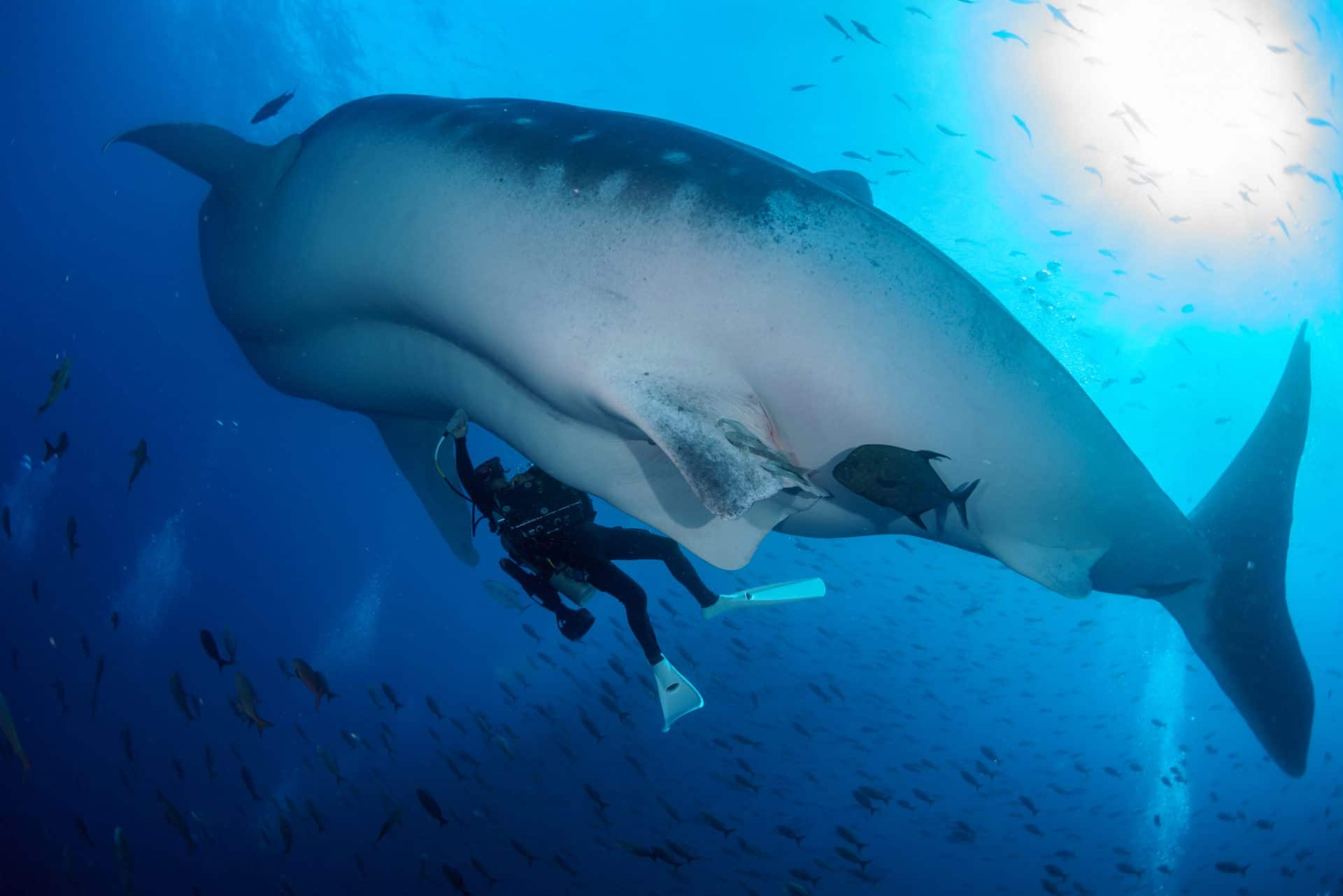 Dr Simon Pierce is co-Founder of the Marine Megafauna Foundation, whilst Dr Chris Rohner is a Principal at the organisation. Other global whale shark experts on the expedition included scientists and conservationists from Galapagos National Park, Okinawa Churashima Foundation, the University of San Francisco and the Galapagos Science Center.

The dive liveaboard expedition focused on one of our Planet's most prolific shark sites, Darwin Island, which is situated about 17 hours by boat from the main Galapagos archipelago. This remote volcanic island, famous for its huge rock arch, is one of the few places where huge adult female whale sharks, up to 14 metres (45 feet) in length, are commonly seen each year. The main aim of the expedition was to assess the sharks' reproductive state.

Dr Simon Pierce, who is co-Founder of the Marine Megafauna Foundation, explains: "Whale shark breeding is a mystery. Only one pregnant shark has been physically examined so far, back in 1995 in Taiwan. That 'megamamma' shark had 304 little whale shark eggs and pups inside, all less than 60 cm in length." 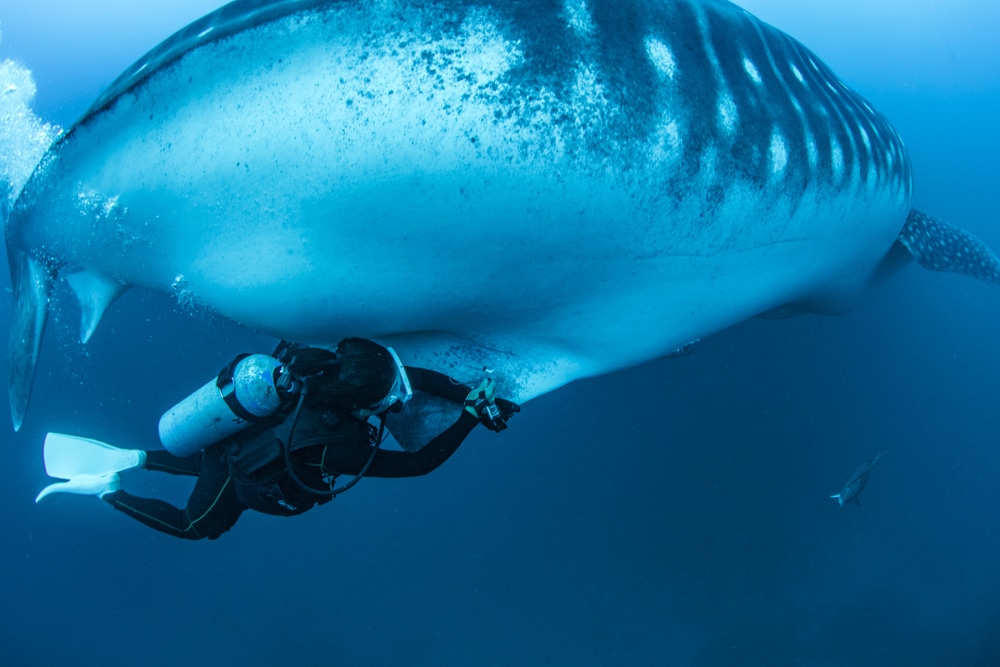 The team conducted scans using a 17 kg ultrasound system in a waterproofed case. Whale sharks have tough protective skin, more than 20 cm thick on some individuals, so the 30 cm penetration of the ultrasound waves proved a challenge - not to mention the difficulty of carefully checking the whole belly area of a gigantic shark while it is swimming. Dr Matsumoto had to use a propeller system mounted on his air-tank to keep up with the sharks.

"We use some interesting technology anyway, but working with the Okinawa team was something else", commented Dr Pierce. "I felt cool by association. We saw dive groups a couple of times at the site, and I can only imagine what they thought - why is that guy diving with a briefcase? And a jetpack?"

Dr Matsumoto reports that the initial results were promising: "We confirmed the presence of follicles in the ovaries but none of the images captured embryos or egg capsules inside the uterus. These adult female sharks we saw at Darwin Island might be on their way to mate further offshore. I am confident that we can judge the sexual maturity, and probably also determine the pregnancy of whale sharks in the field, using the underwater ultrasound".

The researchers attached satellite-linked tags to the sharks to track their onwards movements. Professor Alex Hearn from the University of San Francisco / Galapagos Science Center explains: "We've tagged whale sharks in Galapagos before, but there are lots of predatory sharks at Darwin and they often try to eat the tags, which can rip them out of the whale sharks almost immediately. To reduce early tag loss, we tried a different method on this trip, clamping the tags to the tip of the dorsal fins. All tags are transmitting well, so we should get great information on where these sharks swim over the months to come."

Project member Dr Alistair Dove, from Georgia Aquarium, notes that these tags could document some amazing behaviours: "Whale sharks are already known to be the deepest-diving of all fish. The current depth record is 1,928 m - well over a mile - set by a juvenile whale shark. Larger, older animals can generally dive deeper than young smaller ones, so perhaps we will challenge that record."

Kiyomi Murakumo, from Okinawa Churashima Foundation, successfully collected blood samples from six adult sharks - no easy job. Her colleague, Dr Ryo Nozu, analyzed the results immediately following the trip: "Sex steroid hormone levels in the blood are an excellent way to monitor reproduction in individual sharks. This study measured levels of estradiol, progesterone and testosterone of wild, adult female whale sharks for the first time in the world. Estradiol could be associated with follicular development, and progesterone could be involved in ovulation and pregnancy. Over time, as we sample more whale sharks, we can build up a complete picture of their reproductive cycle by combining the blood sampling with the ultrasonography."

Join one of our expert led expeditions for a taste of life 'in the field' with leading marine scientists and up to the minute insights into Ocean Giants, Coral Reefs and our Ocean environments. 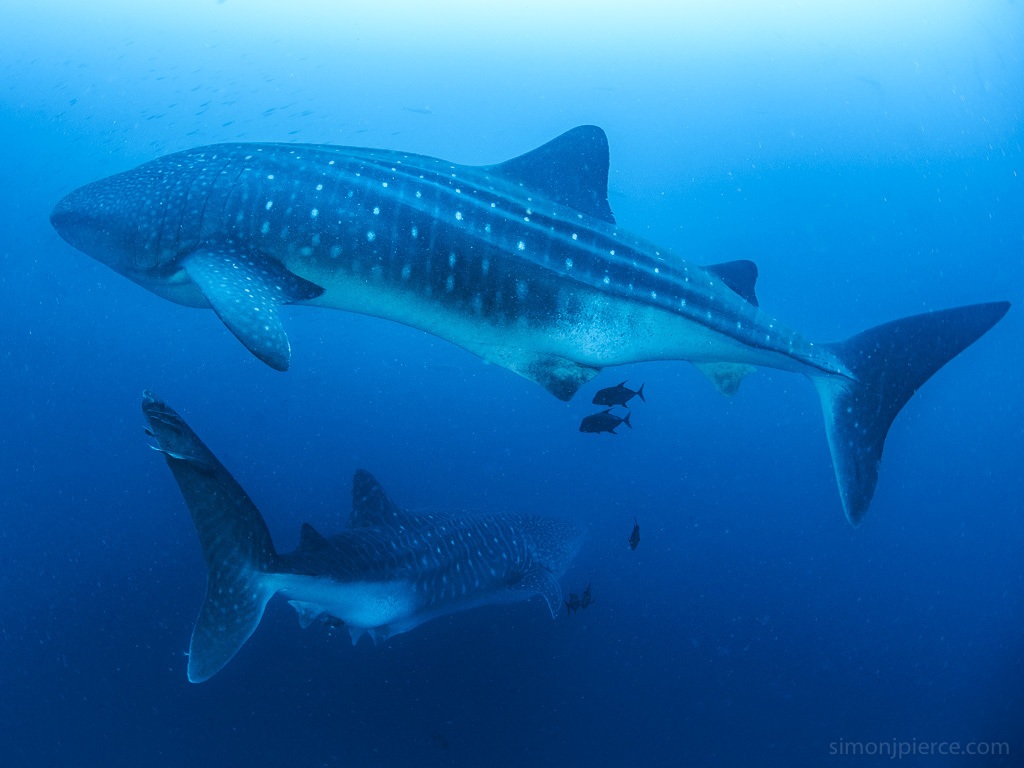