Tsingy is the Malagasy name for the country's dramatic limestone karst rock formations, appearing like a forest of often razor-sharp shards. Limestone itself is a sedimentary rock, formed at the bottom of the sea both by evaporation and deposition of the calcium carbonate remains of billions of sea creatures, whose shells and bones in death fell to the ocean floor. Over millions of years, layers built upon layers, until seismic activity eventually thrust the limestone above sea level.

At Madagascar's tsingy sites, what began as limestone plateaus eroded dramatically over time, weathered from above and below by freshwater acidified slightly by airborne carbon dioxide dissolved within it. This acidified water is called Carbonic Acid. From above, cracks called clints and grikes allow water to penetrate and very slowly dissolve away rock to make the cracks wider. From below, water that cannot settle at the surface, builds into subterranean streams and rivers, eroding the limestone from below.

As time goes by, the surface cracks can widen so much that there is less of the original rock than started. In the longest weathered cases, the surface can be narrowed to a forest of knives; whilst below, caves and canyons form. 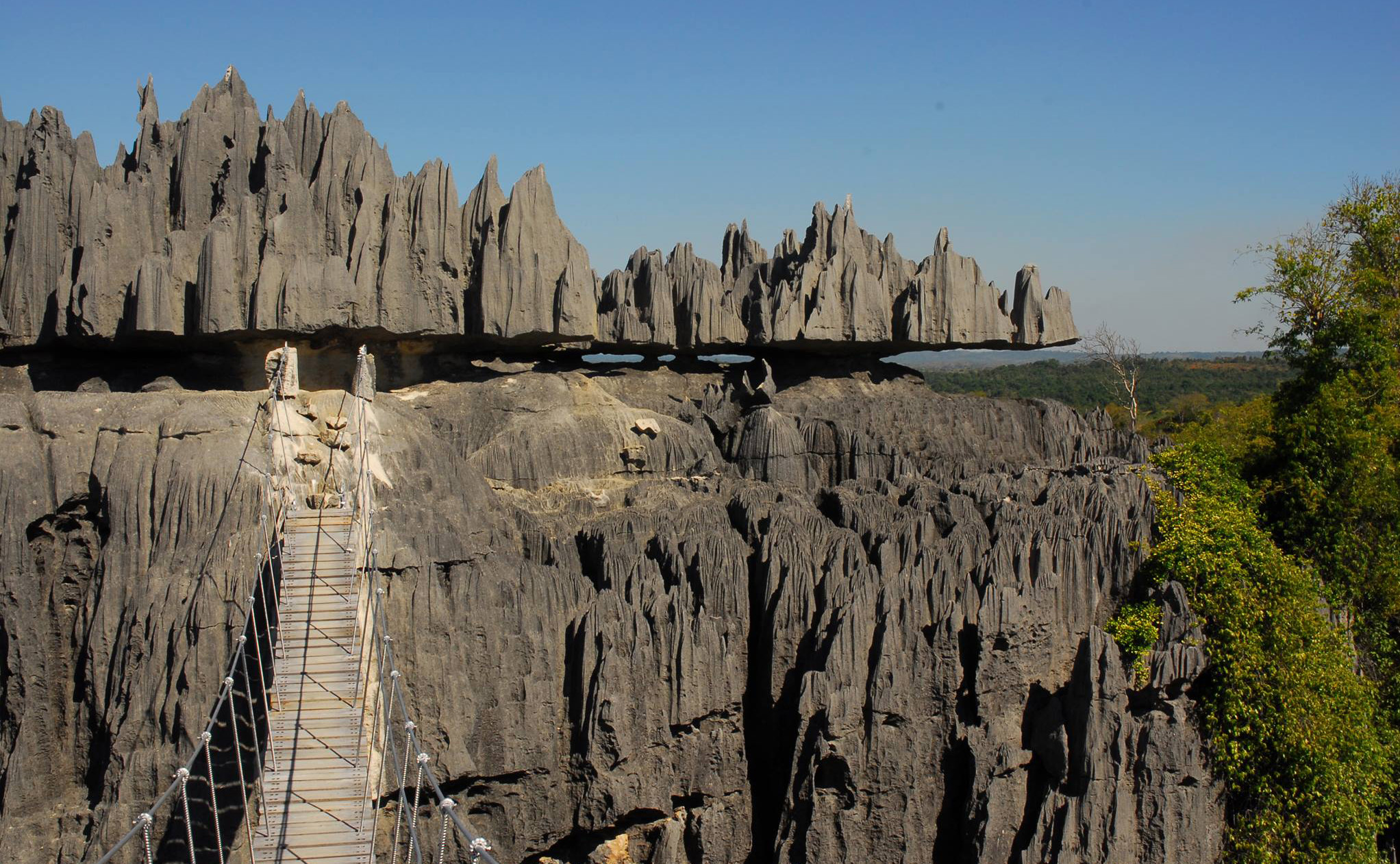 Tsingy is a Malagasy word meaning 'where one cannot walk barefoot'. This description is both apt and very important for ecosystems which have developed in amongst these rock forms. Pockets of forest provide important habitat for wildlife and plants, which through the defence of sharp rock edges, are spared the exploitation of bushmeat hunters, farmers and grazing zebu cattle.

There are three areas of Tsingy we can take you to in Madagascar. The largest is the Tsingy de Bemaraha, which covers more than 1,500 square kilometres in the western dry forests of the country. It lies about 6 hours north of the Kirindy National Park and the Avenue of Baobabs close to Morondava.

The second Tsingy is the Ankarana Special Reserve, where we find the Crowned Lemur. Ankarana is situated close to the northern town of Diego Suarez.

The third area is a 'false tsingy' called the Red Tsingy. This is also in the far north of the country. We call this false tsingy because it  is neither limestone nor slow forming; it is created much faster through simple rain erosion on laterite, which is barren earth exposed due to serious environmental degradation caused by slash and burn agriculture.

To find out how you can see Madagascar's tsingy in the company of our expert guides, click on the trip buttons which appear on this page.