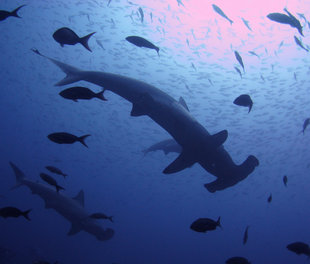 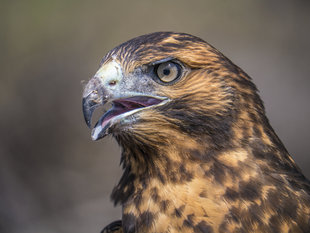 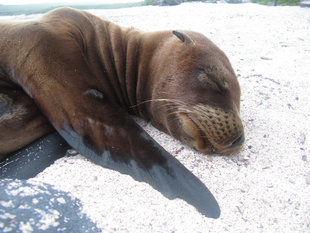 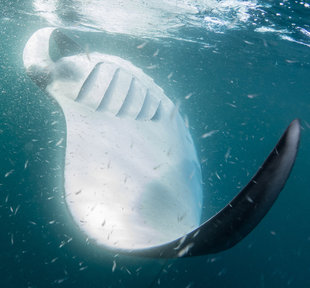 Introduction
Marchena is the seventh largest island in the Galapagos and derives its name from the Spanish monk Fray Antonio Marchena, who was among the first people to visit the island.

The island is located approximately 45 miles due east of the neighbouring island of Genevosa.  At present it does not receive any visitors, but this may change in 2012 if we begin to bring divers to the island on a Galapagos Dive Liveaboard. Of some spectacular marine life, one can hope to see huge schools of hammerhead sharks here - something hitherto considered the reserve of Wolf Rock and Darwin Island.

On land this near pristine island is home to species which include the Galapagos hawk, colonies of sea lions and the Marchena Lava lizard.

Historically speaking, the island has an interesting past, namely for being embroiled in the Floreana Mystery. The bodies of Rudolf Lorenz and the captain of the ship he was on, mysteriously washed up on Marchena's shores.  As there were no natural predators on the island, the bodies were naturally mummified.

Wildlife
Marchena is rather desolate, with just 25% of the island covered in vegetation. There is no fresh water so humans have never settled here.  Consequently, there are almost no human impacts here or introduced species, so the flora and fauna that inhabits the island is almost completely undisturbed.

Marine Life
One of the best dive sites on the island is that of Punta Espejo on the eastern coast.  A dive here will presents opportunities to see cow-nosed rays, sea turtles, large schools of hammerhead sharks and schools of blue-striped snappers, grunts, surgeonfish, spotted moray eels and scorpion fish.

Conservation Issues
Marchena is currently off limits to visitors, but we will be able to start diving here on liveaboard trips in 2012. This will be to help moderate pressure on Wolf Rock and Darwin, but it is in its own right a superb place to see large numbers of hammerhead sharks.

Of invasive species on the island itself, fire ants (Solenopsis geminata and Wasmannia auropunctata)  have become a problem just have they have elsewhere in the Galapagos.  This species currently represents the one of the greatest risks to Galapagos tortoises, as they destroy eggs and hatchlings within nests.  These foreign invaders also prey on birds and other reptile nests and can even displace communities of endemic invertebrates from sites where they are well established.

In recent years, a fire ant eradication project has been successfully implemented on Marchena and it is believed that it has been completely removed from the island.  The project involved first detecting the whereabouts of the fire ants by way of strategically placing line transects throughout the island and baiting them with peanut butter.  Once detected, park rangers applied a poison harmful only to the fire ants. They applied this three times. These locations were then carefully monitored to determine whether the eradication had been successful.  The same eradication methods have recently been adopted on the southern part of Isabela Island in San Pedro by park rangers and the enlisted support of local experienced volunteers.

Galapagos coral is of substantial value to the archipelago's ecosystem, providing important habitat for local marine life.  The El Niño events of 1982-3 and 1997-8 heavily impacted the Galapagos coral, resulting in an alarming reduction of more than 97% of the previously known coralline habitat.  In recent years, the "Corals of Galapagos" project team have run a workshop on "How to protect the remaining coral reefs in the northern Islands of Darwin, Wolf and Marchena", of which local marine experts were involved.  Scientists from the Charles Darwin Research Station, representatives of Conservation International and the Galapagos National Park joined stakeholder groups, including Galapagos dive guides and fishermen, to discuss the importance of the coral reefs in the marine reserve and a plan to create fixed moorings to avoid the use of anchors and reduce the impacts of fishing and tourism on these fragile reefs.  With the combined cooperation of all stakeholders involved, it is hoped that such workshops will be another step towards guaranteeing a safe future for the unique marine ecosystems of the Galapagos.

Geology
Marchena's shield volcano, located in the centre of the island was very active during the 1990s, during which time, many visitors to the area were able to witness the eruptions.  The oldest lava flows recorded on Marchena are estimated to be in the region of 500,000 years old and are of similar composition to those of Genevosa.

Like many volcanoes, Marchena has a caldera, which is more or less elliptical, measuring 6 km by 7 km.  What is interesting about Marchena's caldera, is that it has been almost completely filled with young lava, some of which have spilled down the outside of the volcano. 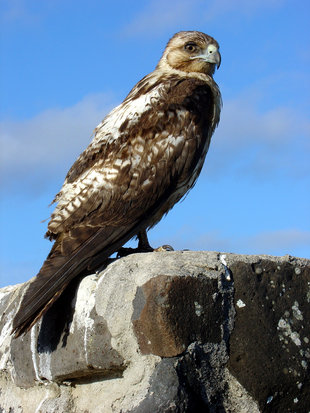 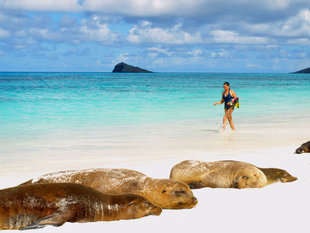 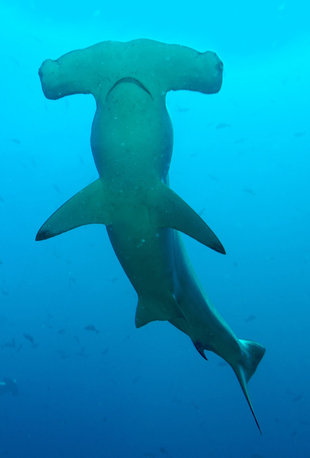