Amazon Pink River Dolphins (Inia geoffrensis geoffrensis) are wonderful but rare characters plying our planet's biggest river system. Aqua-Firma's in-house filmer and photographer, Ralph Pannell, took this video footage in Ecuador,  close to the Peruvian border. This is not an everyday encounter, but we have good chances of seeing these dolphins on our Amazon Wildlife Cruises and highly adventurous Amazon Wildlife, Trek & Pink Dolphin Kayak Adventures.

As the video will explain, these dolphins are born grey and steadily turn pink. The colour they reflect will also be affected by the sunlight; how flush their skin is with blood; and the colour and clarity of the water.  The water where this footage was taken was at the confluence of 'blackwater' and 'whitewater'. Amazon blackwater is relatively clear and free of silt, but strongly pigmented with tannins from rotting vegetation. Whitewater carries silt gathered from erosion.  Pink river dolphins often like the mixing zone because they can find fish here to prey on. 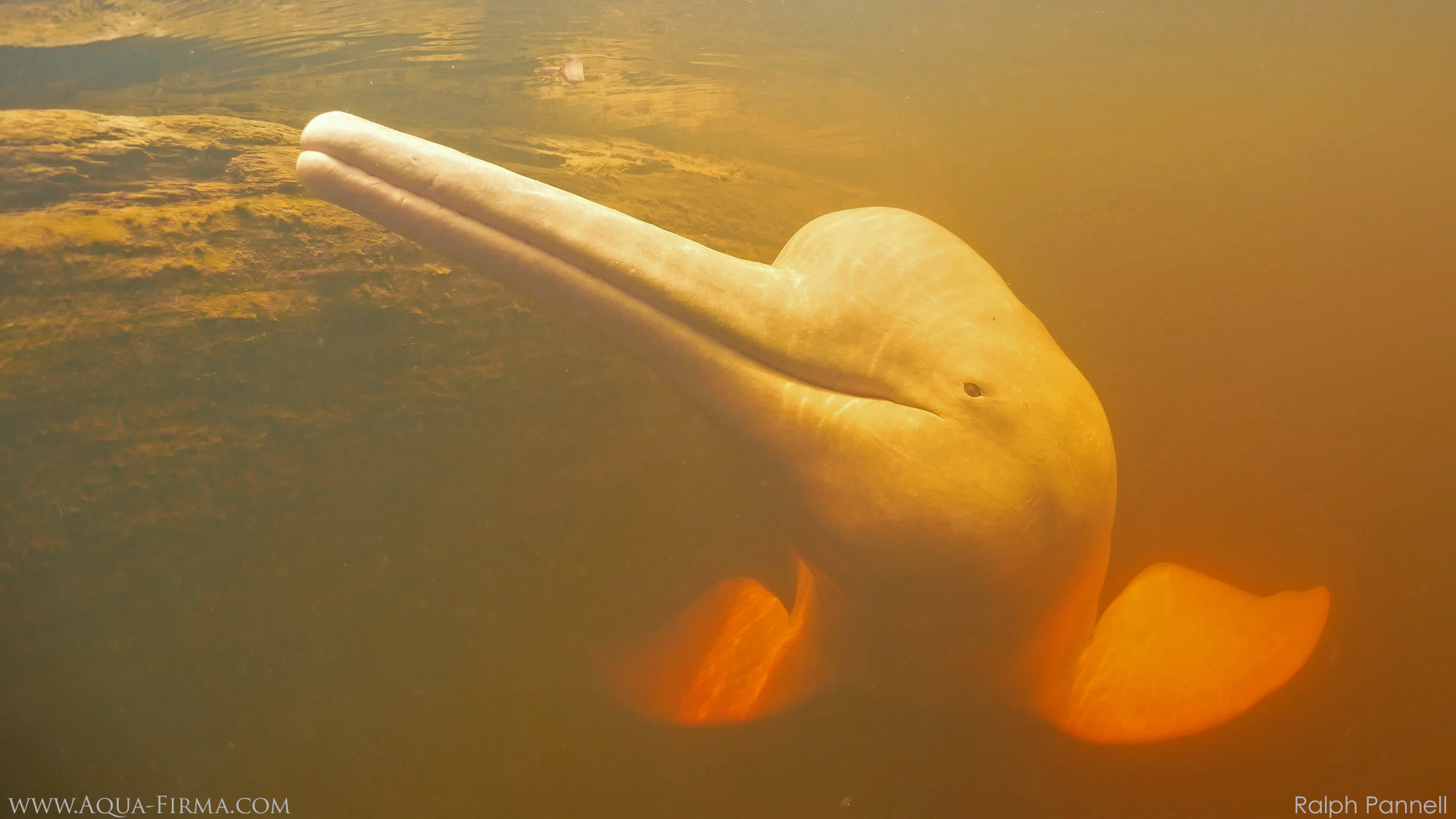 As with most Amazon wildlife and marine life, the main predator to Pink River Dolphins is Man. In many areas, fishermen kill a dolphin and place the carcass in a cage. This attracts catfish, which can be a sizeable catch for a fisherman.

Since rivers are frequently laden with silt, river dolphins cannot rely on eyesight to navigate.  Their primary sense for navigation is hearing. Their enlarged  'melon' head generates clicks which bounce back to them as echos. The dolphins analyse these echos to generate a mental picture of their surroundings. This requires a huge amount of mental processing power - the reason why their brains are 40% larger than a human's. So will they inherit the Earth?! Alas not. Whilst their mental powers are so absorbed into their underwater and forest homes, there is nothing they can do to halt deforestation; river pollution from towns and mining; and targeted killing by humans. There is an estimated 9,000 pink river dolphins left in the wild, with numbers falling year by year.

To seek Pink River Dolphins in their natural habitat,  Aqua-Firma can to take you to a few stunning tributaries of the Amazon, on our very comfortable Amazon River Cruises; and our adventurous Amazon Trekking & Kayaking Adventures in Search of Wildlife & Pink River Dolphins.

Diversity of the Ecuadorian Amazon