Salta & the North-West - Canyons, Forests & the Train to the Clouds

The elegant colonial city of Salta is the entrance point to Argentina's Northwest, a region of stark eroded river canyons, spectacular high altitude Andean Plains and mountains cloaked in diverse cloud forest. A starting point to Aqua-Firma's guided exploration of this area is the region's colonial heartland (Salta was a major city when Buenos Aires was only a village) and the twisted and fascinating rock formations of the Quebrada a las Conchas, the 'Valley of the Shells'. After exploring the valley you might feel that sipping a glass of the region's finest wine from the vineyards around Cafayate is an activity that needs thorough investigation! 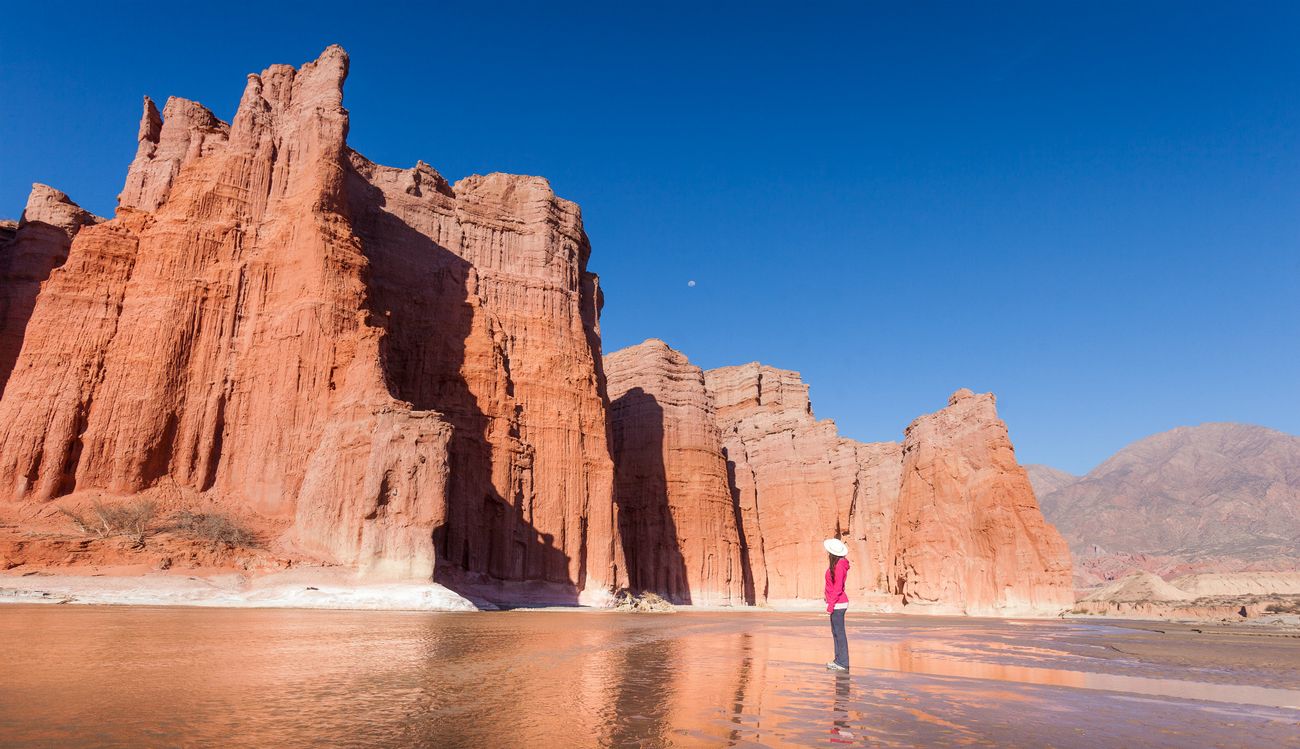 The Andean Northwest is Argentina's most 'traditional' region with a proportion of the population coming from indigenous South American origins. Quechua, the language of the Incas, is still widely spoken here. At the height of Inca expansion - just before the arrival of Francisco Pizarro and the Spanish 'Conquistadores' - this was the southernmost outpost of an empire that extended to up to the borders of present day Colombia. To the south of Salta, the ruins of Quilmes give an insight into an ancient indigenous town that was later dominated by the power of the Incas.

Leaving from Salta we arrange journeys on the famous Tren a las Nubes, which in English means 'The Train to the Clouds'. This is an engineering marvel rising steeply from Salta and climbing more than 3000m on a system with 21 tunnels, 31 bridges and 13 viaducts. Crossing spectacular canyons and gorges the train reaches the arid and beautiful high Andean plain, reaching its high point at the Chorillos Pass, 4575m above sea level. This is undoubtedly one of the Great Train Journeys of the World.

Aqua-Firma can also take you to walking in some impressive areas of protected cloud forest stretching northwards along the Andes eastern edge towards Bolivia. These national parks, Finca El Rey and Calilegua, boast over 200 bird species and wildlife such as pumas, spider monkeys and tapirs. Tropical cloud forest covering Andean mountainsides is not what most people would immediately associate with Argentina, but it is a testament to just how diverse a journey through this country can be.

To view a sample itinerary of Salta and the Northwest, click on the Itinerary tab just beneath the scrolling banner images above this text.

This 7 days itinerary provides an opportunity to see some of the full diversity the north west region has. This can be shortened or lengthened to fit in with your personal timings and interests.

Arrive at Salta Airport where you will be met by one of our representatives and transferred to your Salta hotel. The rest of the day is free to explore this scenic and bustling city.

Full day visit through the city with a private guide taking you to the main sites and museums in the city including the Cathedral, the Museo Historico and excellent Museo de Arqueologia.

Day expedition on the magnificent Tren a las Nubes, up to the high Andes  and the Chorillos Pass at 4575m, before returning to Salta at around 10pm.

A guided day excursion through the twisted canyons and rock formations of the Quebrada de las Conchas, then reaching the lovely town of Cafayate, visiting some of the town excellent vine 'bodegas' and sampling some their produce!

An overnight wildlife expedition to the biodiverse cloud forests of Parque Nacional el Rey. The afternoon will be spent exploring the bird and wildlife rich trails with our naturalist guide. Accommodation lodge based or camping.

Morning bird watching walk before returning to Salta after lunch

Transfer to Airport for your onward flight.