South Georgia is a very special place. The overwhelming abundance and variety of wildlife, combined with the rich and fascinating stories of South Georgia’s whaling, military and epic human history makes this island one of the highlights of an Antarctic experience.

The island is also incredibly beautiful. Sweeping plains and jagged mountains mould together, punctuated by huge glaciers which pour down the mountains calving icebergs to the sea. Long tussock grasses cover vast areas of the lower flanks, providing excellent nesting grounds for birds including the majestic wandering albatross and the endemic South Georgia pintail. 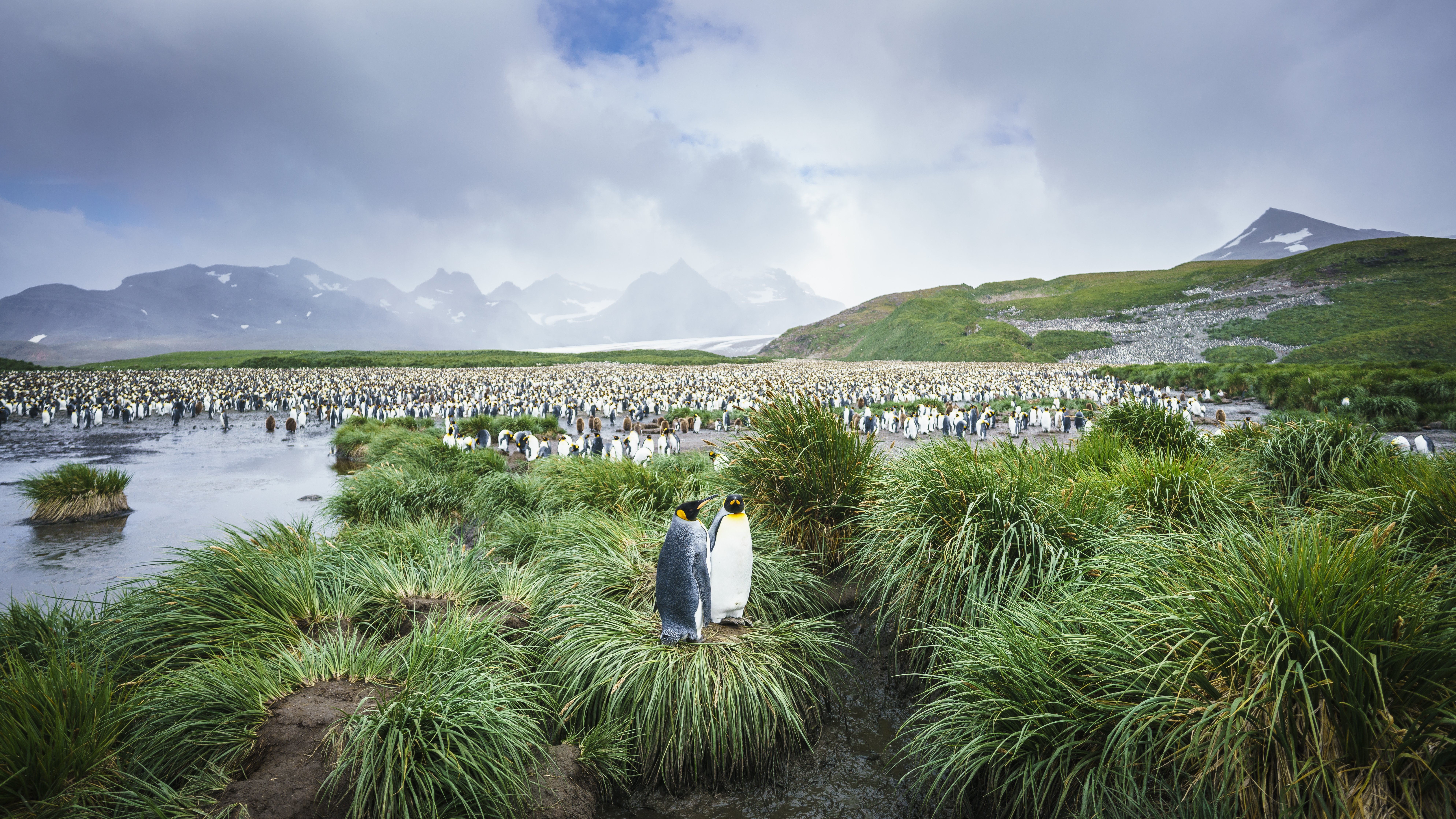 Lying north of the Antarctic Peninsula, summer in South Georgia starts earlier and lasts longer than at its icy neighbour. As such it is a vital breeding ground for huge concentrations of seals, penguins and other birdlife which take seasonal residence along its shores.

The waters here are extremely cold and contain large supplies of oxygen and nutrients that support the abundant wildlife for which this Island is renowned. More than half the world's population of southern elephant seal reside on South Georgia and territorial males guard harems of up to 100 females in the breeding season. Half a million pairs of King Penguins form the spectacular feature of Salisbury Plain, one of the largest breeding colonies in the World. With around 105,000 pairs of Gentoo Penguins and 6,000 pairs of noisy and boisterous Chinstraps, the abundance of wildlife along these shores can be truly overwhelming.

The great success story of South Georgia is the fur seal. Although once thriving in numbers, these seals were brought to the edge of extinction as a result of indiscriminate hunting with only 25 animals remaining by the 1950's. Today they are thought to number over 3 million.

For many visitors, this spectacle of wildlife provides emotional and never to be forgotten memories. But this wild and remote island also has a strong human history: being able to stand and reflect on the anchorage of Scott's Discovery or to remember the feats of Shackleton at his grave side is indeed a humbling experience.

This is a sample only based upon a 19 day voyage. The final itinerary will be determined by the Expedition Team and is influenced by local conditions, like ice and weather. 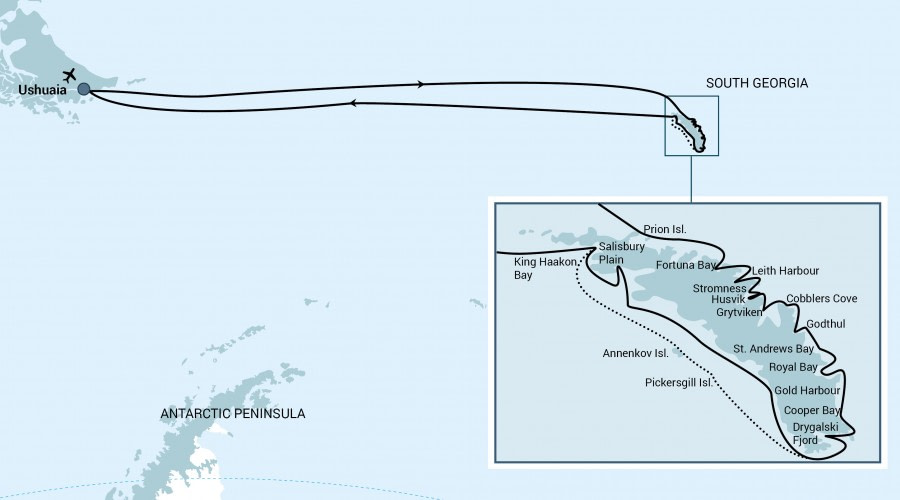 Your voyage begins where the world drops off. Ushuaia, Argentina, reputed to be the southernmost city on the planet, is located on the far southern tip of South America. Starting in the afternoon, you embark from this small resort town on Tierra del Fuego, nicknamed “The End of the World,” and sail the mountain-fringed Beagle Channel for the remainder of the evening.

En route to South Georgia, you cross the Antarctic Convergence. The temperature cools considerably within the space of a few hours, and nutritious water rises to the surface of the sea due to colliding water columns. This phenomenon attracts a multitude of seabirds near the ship, including several species of albatross, shearwaters, petrels, prions, and skuas.

This small group of 6 islands on the South Georgia Ridge in shallower waters. The nutrient-rich waters in this area offers a lot of food for birds and whales. The islands are named after the South Georgian Shags, known for their bright blue eyes and yellow patch on their beak.

Today you arrive at the first South Georgia activity site. Please keep in mind that weather conditions in this area can be challenging, largely dictating the program.

Salisbury Plain, St. Andrews Bay, Gold Harbour
These sites not only house the three largest king penguin colonies in South Georgia, they’re also three of the world’s largest breeding beaches for southern elephant seals. Only during this time of year do they peak in their breeding cycle. Watch the four-ton bulls keep a constant vigil (and occasionally fight) over territories where dozens of females have just given birth or are about to deliver. You can also see a substantial number of Antarctic fur seals here.

Fortuna Bay
A beautiful outwash plain from Fortuna Glacier is home to a large number of king penguins and seals. You may have the chance to follow the final leg of Shackleton’s route to the abandoned whaling village of Stromness. This path cuts across the mountain pass beyond Shackleton’s Waterfall, and as the terrain is partly swampy, be prepared to cross a few small streams.

Leith Harbour, Stromness, Husvik
These sites remind us of the scale of the whaling industry in the early 20th century. Elephant and fur seals breed and moult here. Gentoo penguins also occupy the landing sites. Antarctic prions and South Georgia dive petrels may be observed, especially in the area of Husvik.

Grytviken
In this abandoned whaling station, king penguins walk the streets and elephant seals lie around like they own the place – because they basically do. Here you might be able to see the South Georgia Museum as well as Shackleton’s grave.

Cobblers Cove, Godthul
At Cobblers Cove we aim for Rookery Point to see macaroni penguins. Light-mantled sooty albatrosses nest along the coastline and giant petrels can be observed as well. Godthul (Norwegian for “good cove”) was named by Norwegian whalers and seal-hunters and remains such as bones can still be found along the shore line. Beaches are the home of gentoo penguins and seals.

Royal Bay (Moltke Harbour, Will Point & Brisbane Point)
Moltke harbour in Royal Bay was named by the German International Polar Year Expedition in 1882 and some of the remains of their dwellings are still visible. The scenery of Royal Bay is beautiful, dark sandy beaches, followed by the green tussock colors and finally dominated by the snow and ice covered Ross Glacier. Royal Bay one of the windiest bays on the island, zodiac cruising is spectacular. Approx. 30,000 pairs of king penguins live here.

King Haakon Bay
British explorer Ernest Shackleton reached King Haakon Bay during his journey of 800 sea-miles by open boat “James Caird” from Elephant Island. From here he crossed to Stromness to ask for help to rescue his party at Elephant Island after they had left the Weddell Sea where their ship got crushed by ice. Elephant seals dominate the beaches. Birdwatchers will look out for South Georgia pipits, Antarctic prions as well as common diving and blue petrels.

There may be sea ice on this route, south polar skuas and snow petrels could join the other seabirds such as albatrosses and petrels trailing the vessel. Eventually you will reach the Drake Passage and you’re again greeted by the vast array of seabirds remembered from the passage south.

You will disembark in Ushuaia today.

Our prices include:
- Voyage as indicated in draft itinerary
- All meals, snacks, coffee and tea
- All shore excursions and zodiac activities
- Program of lectures by noted naturalists and leadership by experienced
expedition staff
- All miscellaneous services taxes and port charges throughout the programme
- Comprehensive pre-departure material
- Polar boots for trip duration
- Aqua-Firma automatically offsets the Carbon Emissions of your polar voyage

Activity Level: Low unless you select an adventure activity such as kayaking.

Fuel surcharge: A fuel surcharge may apply on certain departures should the price of Brent crude rise above US$120 barrel 90 days before the voyage

Single supplement: Single occupancy price is between 1.7 times the per person cabin price. However this does not apply if you are prepared to share a cabin with another passenger of the same gender.