Beluga is a splendid steel-hulled motor yacht, originally built in Hamburg, Germany in 1968. She was completely refurbished in 1986, transforming her into an elegant cruising vessel. With her large spacious decks and sleek modern design, Beluga is a fantastic way to explore the Galapagos Islands in style and at speed. 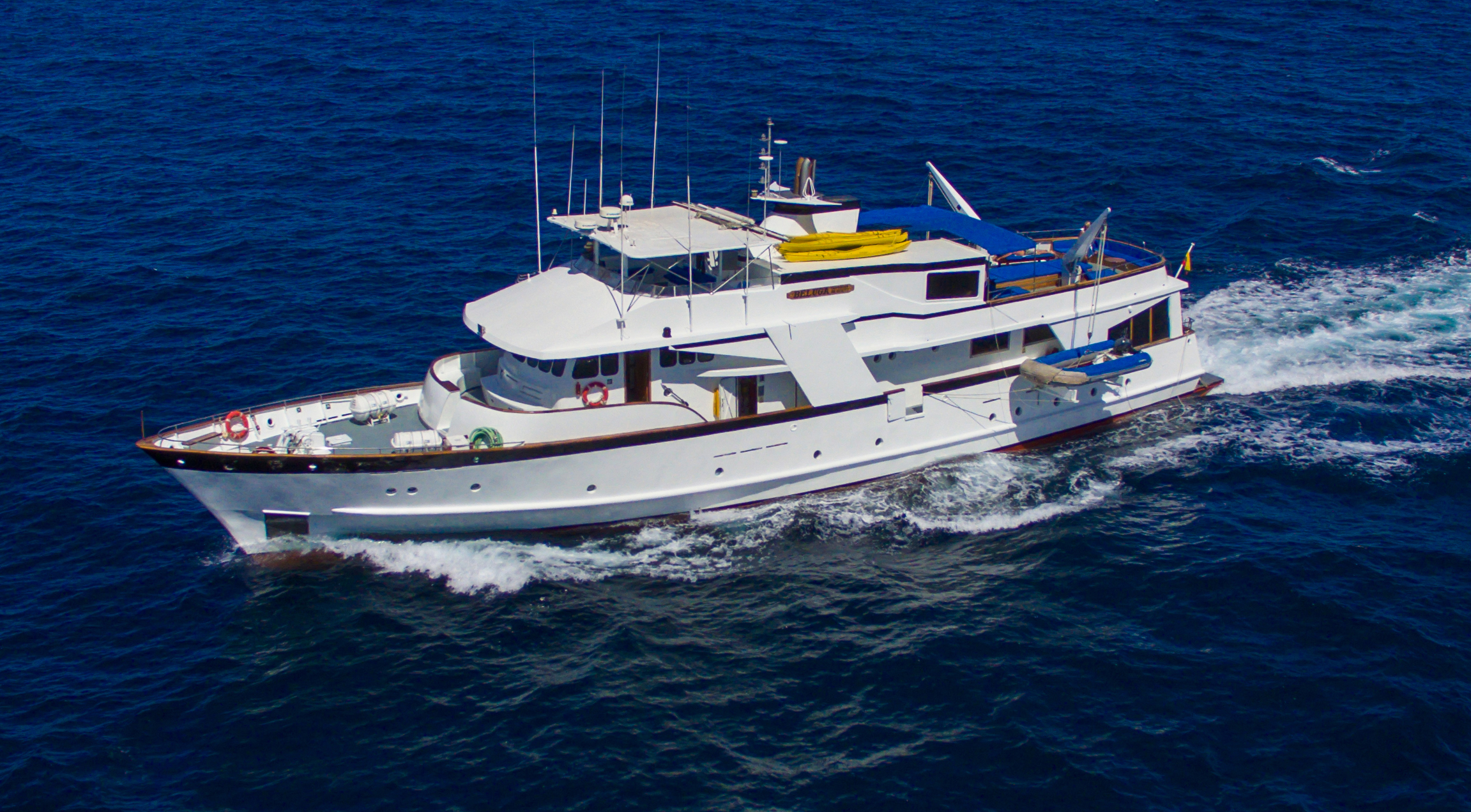 She can accommodate up to sixteen passengers in eight beautifully decorated double cabins. Each cabin is fully equipped with air-conditioning and its own private en suite facilities. A useful consideration for mixed groups and families is that her cabins are a mix of twins and doubles. Another consideration is that her capacity of 13 is also smaller than most others vessels in the Galapagos, for which 16 is usually the smallest group size.

Guests can relax on her sundecks or unwind by the bar in the comfort of salon. The panoramic windows in the salon/dining area provide an excellent vantage point from which to do a spot of whale and dolphin watching.  The crew onboard are friendly and attentive, serving up Ecuadorian specialities and continental cuisine in a cosy and informal dining area.

Beluga has all the facilities of a modern cruising vessel, but still manages to maintain her classic appeal.

Please note that these itineraries are subject to change without notice due to seasonal changes, last minute weather conditions and the decision of the Galapagos National Park authority. 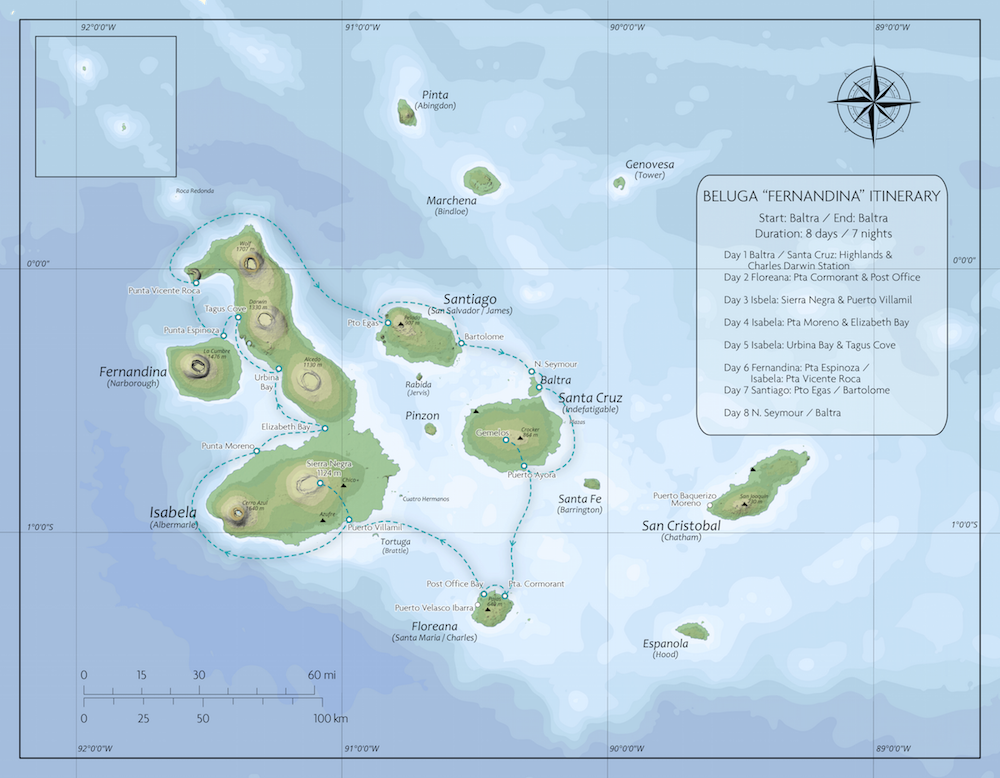 Devil’s Crown: This is a snorkeling site located just off Punta Cormorant. The site is a completely submerged volcano that has eroded to create the appearance of a jagged crown.

Post Office Bay: This is one of the few sites visited for its human history. Visit the wooden mail barrel where letters are dropped off and picked up and remains of the Norwegian fishing village.

Isabela Island (Albemarle): Isabela is the largest of the Galapagos Islands formed by five active volcanoes fused together. Wolf Volcano is the highest point in the entire Galapagos at 1707m.

Puerto Villamil: Puerto Villamil is a charming small town on a white sand beach. Highlights include the Tortoise Breeding Station and the flamingo lagoon. Other visits (depending on conditions) are the Tintoreras or Los Humedales.

Elizabeth Bay: This spot is only accessible by dinghy. It is possible to see penguins on the small islets in the bay. The end of the bay is long and narrow surrounded by three species of mangroves. Galapagos Sea Turtles and rays can usually be seen in the water.

Urbina Bay: Urbina Bay is located at the central-west coast of Isabela Island at the foothills of Alcedo and Darwin volcanoes. Highlights include the colourful land iguanas, Galapagos Giant tortoises and the coral uplifting from 1954.

Tagus Cove: Tagus Cove is a natural harbor where centuries ago whalers and pirates left their ship’s names painted or carved on the rocks. A walk uphill to Darwin’s Crater salt-water lake will provide an excellent view.

Fernandina Island: Fernandina is the youngest volcanic island and is still active.

Punta Espinoza: Punta Espinoza is a place famous for its large colonies of marine iguanas and as the habitat of unique species like the flightless cormorant, Galapagos penguin, Galapagos hawk, Galapagos snake, among others.

Isabela Island
Punta Vicente Roca: This site is visited by dinghy rides along the cliffs or the partially sunken cave at the water’s edge. Nasca boobies, blue-footed boobies and flightless cormorants inhabit the shoreline

This Island is located between Isabela and Santa Cruz Islands. This Island offers a wide variety of seabirds, marine iguanas and fur seals.

Puerto Egas: A walk along the rocky coast line that will you show you a view of some of Galapagos’ best tide pools. Some highlights include: Sugar loaf volcano, fur seals, oystercatchers, marine iguana colony, and old salt mine.

Bartolome Island: A hike will take you to the highest point on Bartolome for a spectacular view. Sea lions and penguins can be seen around Pinnacle Rock. There is a sandy beach with great swimming and snorkeling.

This 8 days itinerary can be broken into two shorter sections: 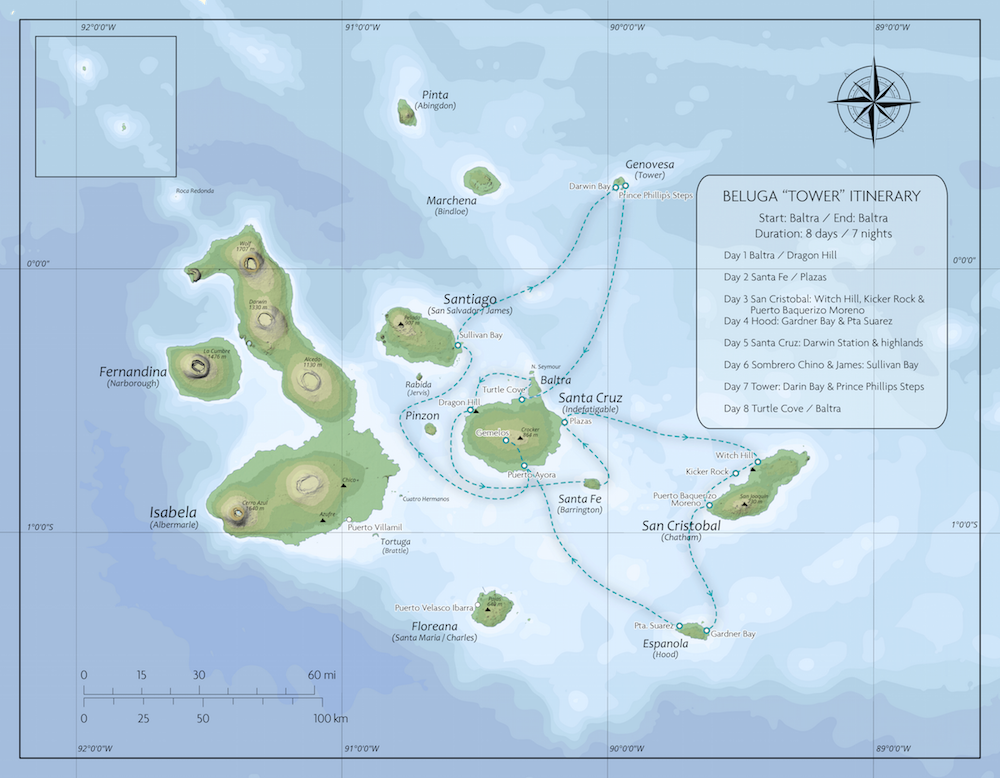 South Plaza Island: Plazas consists of two very small islands that were uplifted from the sea, separated by a channel. Only South Plazas has a visitor site. The highlights include tall Opuntia cactus, land and marine iguanas, rocky cliff that looks out towards open ocean which is also a nesting site for red-billed tropic birds and gulls, and a seal lion bachelor colony.

San Cristóbal is the easternmost island of Galapagos and also one of the oldest.

Kicker Rock: Kicker Rock (Leon Dormido) is the remains of a lava cone eroded by the sea, the two vertical rocks rising 500 feet from the ocean form a small channel that is navigable by small boats.  Many sea birds can be seen here.

Pto Baquerizo Moreno: Here you will either visit El Junco o Cerro Tijereta depending on conditions, followed by a visit to the Nature Interpretation Centre. El Junco is a freshwater lagoon at 700m, with great views and ferns, miconias, pintails and gallinules. Cerro Tijereta has a frigate bird colony.

Hood Island (Española):  Hood is the oldest of the Southern Islands and is the southernmost in the archipelago. Because of its remote location a unique range of endemic species evolved here

Gardner Bay: Located on the northeast of the island, the site has a long and beautiful white sand beach inhabited by sea lion colonies.

Islote Garnder and Islote Osborn: These islets are snorkeling sites where visitors will see an abundance of tropical fish, reef sharks,  and turtles.

Punta Suarez: The wildlife at Punta Suarez is plentiful and varied. Along the cliff visitors can enjoy the blowhole where seawater is forced about 20m into the air. The highlights are the Waved albatross (April-Dec) that are only found on Hood, Galapagos Hawks, blue-footed boobies, Ñasca boobies, and Española lava lizards.

Santa Cruz Island (Indefatigable): Santa Cruz is the second largest island and the most populated of all islands.

Tower Island (Genovesa): Tower is an eroded flat volcanic island, with a natural harbor, which is actually the submerged caldera of this volcanic island.

El Barranco: There is a good possibility of seeing the unique “Short eared owl” at this site. During the dinghy rides along the cliffs fur seals and several species of seabirds can be spotted.

Caleta Tortuga (Turtle Cove): Turtle Cove is a red mangrove lagoon on Santa Cruz and a perfect example of how mangroves alter the marine environment to create a rich and unique habitat.

50% Child Discount applies for children age less than 12 years by the time they board this ship (1 child per adult).

Christmas & New Year supplement of US$195 per person applies. 5, 6 & 7 day departures are not available during this period.

Our prices include
Galapagos safari as indicated
Shore excursions and zodiac activities
Use of kyaks & snorkel gear (except wetsuits)
All meals onboard vessels
Coffee, tea and water
All boats are accompanied by English speaking naturalist guides who have been trained by the Charles Darwin Station and are licensed by the National Park.
A year's membership to the Galapagos Conservation Trust.
(*subject to availability)

Not included
Flights
Arrangements in Quito or Guayaquil (please contact us for flights and hotel package)
Wetsuit rental
Galapagos Immigration fee $20** (to be paud at Quito or Guayaquil airport)
Galapagos National Park fee US$100**
Isabela island docking fee US$10**
Drinks, tips, snorkeling equipment and wet suits (depending on the ship).
Travel insurance.
(**correct at time of writing)

Single Supplement
If you are willing to share your cabin with another person of the same gender then there is no single supplement. For single cabin occupancy add 50% to the per person cabin price.