There are some things in life which stand out as the pinnacle of adventure and sailing to Antarctica is one of them. This is an extraordinary 21 day voyage and a true Antarctic sailing expedition. To visit the white continent is in itself incredibly memorable, but to explore its mountainous coasts, glaciers, icebergs and wildlife under sail is an unforgettable experience.

Some of the highlights of this trip include:

Help sail an ocean-going yacht across the Drake Passage, keep watch across the Southern Ocean, and if you wish, learn to set sail, steer and navigate under the guidance of experienced professionals.

Explore Antarctica and experience in depth the landscapes and wildlife of the Antarctic Peninsula, supported by two zodiacs and accompanied by professional crew with in depth knowledge of Antarctica.

Enjoy small group travel with only 8-12 guests, providing the flexibility to indulge group interests be that a passion for history, wildlife or photography and have the chance to capitalise on opportunity!

This is one of our longest Antarctic voyages, allowing extra time to cross the Drake passage but leaving plenty of days for complete immersion in Antarctica; twice as long in fact than most other peninsula voyages. The icy oceans are a rich feeding ground for whales including orcas, humpbacks, blue and sperm whales and an important nesting site for macaroni, chinstrap and gentoo penguin colonies. Travelling by yacht, quiet, unobtrusive and at one with nature will hopefully invite great opportunities for their close observation.

Your ship is a handsome but functional 22m aluminium ocean sailing yacht. She is a pioneering veteran with a renowned pedigree for taking on the Southern Ocean and exploring deep inside the Antarctic wilderness.  She is tried, tested and trusted and through the years has facilitated a long resume of expeditions by clients such as BBC, National Geographic and privately chartered by researchers and adventure seekers alike.

She was built specifically to meet the challenges of the harsh polar environment. Assisted by a fully retractable lift keel and rudder she was designed to be able to explore shallow ice strewn waters.

Below decks the yacht is fully central heated with warm showers and a bright spacious dining room where the food is wholesome fresh and plentiful, prepared sometimes with your assistance.  Of the 6 guest cabins 4 have comfortable bunks (not pipecots) and two mid cabins have double beds each with semi private bathrooms.

This is a unique once in a lifetime journey. Although there is no requirement for previous sailing experience we do ask for a sense of adventure and the desire to contribute as crew, participating in daily tasks above and below decks. You can learn as much or as little as you want from the on-board professional sailing crew, from navigation and steering, to setting the sails.  An experienced sailor or not, you are certainly going to earn some sea miles as well as some memories on this magnificent voyage.

This is a sample only. The final itinerary will be determined by the Expedition Team and is influenced by local conditions, like ice and weather. 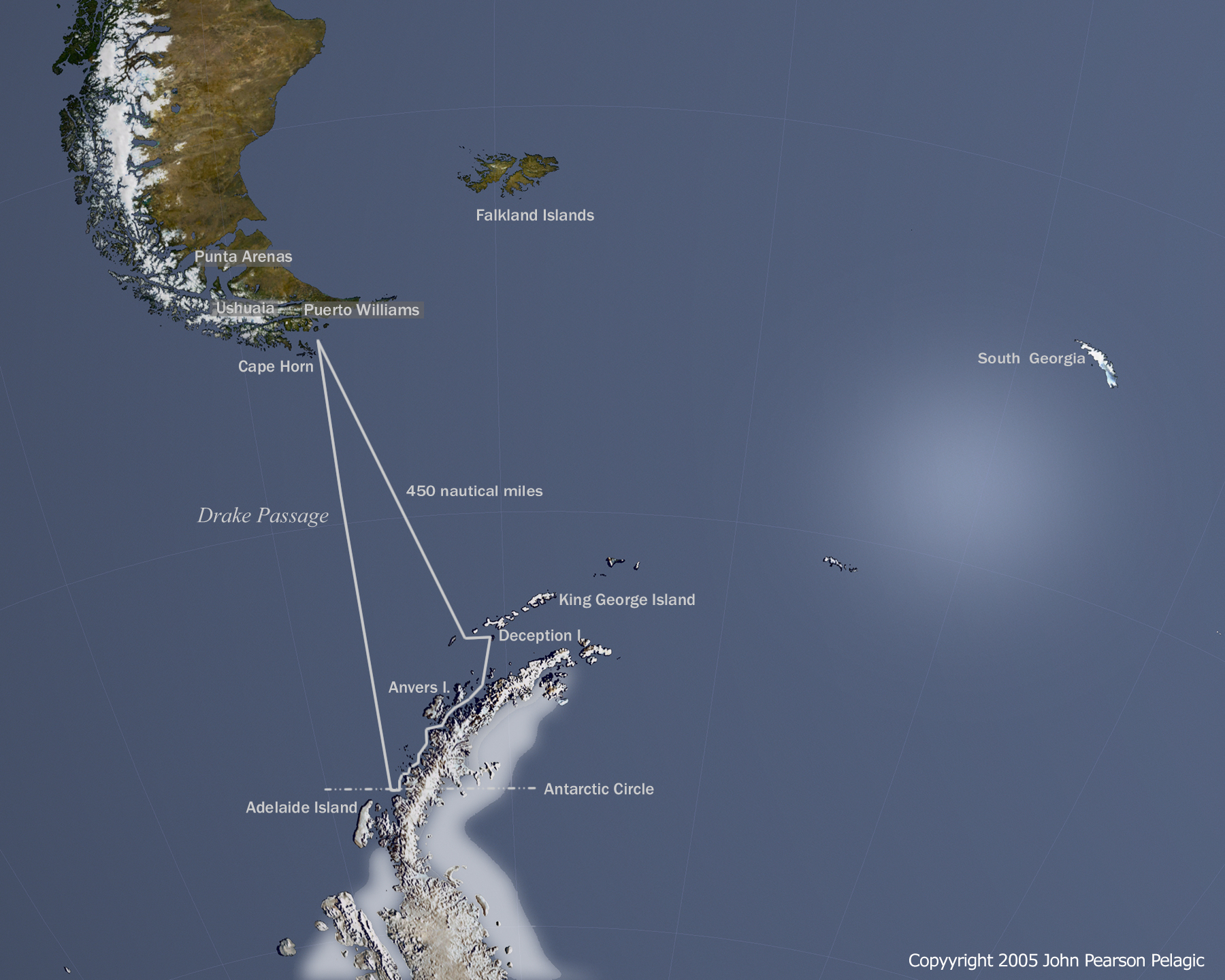 Today you will depart Puerto Williams and head east through the Beagle Channel before turning south through the Cape Horn archipelago. Weather permitting, you will sail directly across the Drake Passage for the Peninsula. On the other hand, if strong headwinds are forecast or if there is a risk of storm, you will seek shelter in any number of three anchorages within the archipelago. If you are storm bound for a day or two while the system moves through, there will be opportunities for long walks ashore on the rugged terrain of Tierra del Fuego.

Crossing the Drake Passage to first shelter on Deception Island should take no more than 60 hours. It is emphasized again that if storm winds are forecast, a day or two waiting in the Cape Horn archipelago will be necessary until a safe and comfortable crossing can be made.

The plan is to arrive on Deception Island in the South Shetland archipelago. This is a semi active volcanic island and we enter the lagoon which is the flooded caldera.  The landscape is unique in the Antarctic region as the island’s shape is a combination of volcanic ash and layers of ice. One night and day will be spent here rigging the boat for inshore sailing, briefing the team on the Antarctic guidelines with respect to the wildlife and taking any number of walks ashore which can include a visit to Whalers Bay, the site of the first commercial whaling operation in the region. On the day of departure, sea conditions permitting, you can hope to land on the southeast corner of Deception where one of the largest Chinstrap Penguin colonies in the Antarctic can be observed.

Sail south for the Gerlache Straits. This can be done overnight (in relative daylight) as the majority of the passage is offshore through the southern portion of the Bransfield Straits. From the northern section of the Gerlache Straits, you would navigate in between Anvers Island and Weincke Island  the Neumayer Channel - and then continue south towards the Penola Straits.

From here on south, Humpback Whales will be in abundance, so you should be able to divert at any time to try and get close to them, which involves turning off the engine and drifting. Leopard Seals can also be approached as they ride the ice floes feeding off the penguin population.

Day 6: Sail through the Lemaire Channel

Early morning sail through the Lemaire Channel which is a narrow, ice filled passage fringed between the high mountains of Booth Island and the mainland. This is considered to be the most scenic stretch of water on the Peninsula and hence its nickname, "Kodak Valley!"

The plan is to spend the day in the Penola Straits, with a possible temporary anchorage off Hovgaard Island. This and the nearby Pleneau Island are good places for a walk ashore where a small colony of Elephant Seals reside. The night would be spent anchored off Booth Island with stern lines to the shore on either side of an isthmus depending on which way the wind was blowing.

In the middle of Penola Straits lies Yalour Island which is one of the most attractive Adelie Penguin colonies on the Peninsula. On a sunny day, the views across to Mt. Shackleton and the peninsula plateau beyond are spectacular. If the weather conditions are favourable, you will anchor off here for the morning and go ashore.

The afternoon and night will be spent only a few miles away at the Ukrainian scientific station Vernadsky. This was formerly the British Antarctic Survey base Faraday, where the ozone whole was discovered with the Dobson spectrameter which is still in use today. You can expect a warm welcome and a tour from the base commander. The anchorage is very protected and you will moor to the shore in a narrow backwater in the small archipelago of the Argentine Islands. This is also the most secure of storm anchorages. This is probably the best example of one of the old Peninsula bases that is still functioning.

Three days will be spent probing south into the Grandidier Channel and possibly into Crystal Sound. Since last year’s sea ice is very unpredictable, one can never be sure how far you can get on the inside passage, so you may have to backtrack and go on the outside via the Pitt Islands where you should have good shelter. On the outside of the island chain the big icebergs are usually stacked up touching the bottom and breaking up. If there is a swell running it is dramatic to see them heaving up and down and not uncommon to see quite a few capsize.

The culmination of the voyage and the goal on this stretch would be to reach the level of the Antarctic Circle and land on the mainland. If you can make it through the inside you would shelter near Prospect Point at the Fish Islands. Prospect Point is the site of an old British Antarctic Survey base that was abandoned in the 50’s and is soon to be removed. An interesting place if it is still standing!

This will be a highly variable (and therefore the most interesting part of the voyage for some people!) part or the expedition, as the landscape here is open and stunning, but on the other hand very challenging as any good shelters for the vessel are few and far between. This is where you ‘suck it and see’ for a better turn of phrase.

Aggregate lost time assumed due to unnavigable conditions. You can expect to be storm bound somewhere!

Working your way back up north through the Penola and Lemaire Channels you will anchor and put lines ashore to Weincke Island near Port Lockroy. This has become the de facto visitor center for the cruise ship trade, but it is always worth a visit. Formerly a British Antarctic Survey base and recently renovated as an information center, they provide the service of a British Post Office selling stamps, post cards, information sheets, maps, etc. The base, manned in summer only, has been declared a Site of Historic Interest within the framework of the Antarctic Treaty System. The base was originally built on a Gentoo Penguin colony and today the humans are still very much the guests.

Going south about Weincke Island back into the Gerlache you can hope to steam for a few hours into Paradise Harbour, again looking out for Humpback Whales along the way. The night may be spent at Cuverville Island (bird and seal populations) to the north or within the Melchior Archipelago between Anvers and Brabant Islands.

Eventually, the Melchoir Islands are the best place to jump off from for the return passage across the Drake. By Day 16, you will all be watching the weather closely for an opportunity to cross. The downside is an early departure, but any spare days can be spent near Cape Horn with a visit to Horn Island possible. The risk of a late departure is missing a favorable pattern and still being there on Day 20! When needed, the crew will be using a weather router in America so that they can predict the situation for up to five days in advance.

Recrossing the Drake Passage and/or spare days at Cape Horn.

Puerto Williams, last night on board.

You will disembark, bid your farewells and fly back to Punta Arenas and connect to Santiago.

Included:
Voyage as indicated in draft itinerary
All meals, snacks, coffee and tea
Use of Sail Racing sailing foul weather gear
Use of personal safety equipment for sailing (lifejacket, harness)
Use of Inmarsat communications equipment
All shore excursions and zodiac activities
Leadership by experienced expedition staff
All miscellaneous services taxes and port charges throughout the programme
Comprehensive pre-departure material